Our final destination on the trip. We’d have just over 2 full days there, and the highlight and main activity, would be Scuba diving – there are certainly good spots near the Okinawa Main Island (沖縄本島), but the outlying islands such as Ishigaki, are even better. Although it’s still part of Japan’s Okinawa’s prefecture, it’s so far south that it’s actually closer to Taiwan than the Okinawa Main Island.

We booked a day package with an operator called Umicoza (海講座). Although not a main focus for us, it boasts about its manta viewing dives, and the fact that it is based near the famous “manta scramble” dive site on the north-east of the island. It’s also pretty active on social networks and seems to have plenty of customers.

Many customers indeed – despite it being a weekday and not during the peak season, there were at least a dozen people at the shop when we arrived in the morning. It being no more than a cramped shed with diving gears crowded everywhere didn’t help.

We did 3 dives in total, finishing at about 4 pm. We were told in the beginning that we couldn’t do the manta site that day (couldn’t remember the reason – not the right season perhaps); this being our second dive trip after getting a licence in Malaysia, I’d say the water condition was better, but nothing impressive.

As we don’t own an underwater camera, unfortunately there isn’t much to show here in terms of photos.

After wrapping up, we were left standing around for quite some time before some staff finally decided to drive us back to the hotel. As with our experience in the morning, we just wondered why this shop had so many customers despite offering such level of service that is uncommon in Japan. They didn’t even have place for a second day when we initially asked to book for 2 days – though for us it turned out a blessing in disguise. 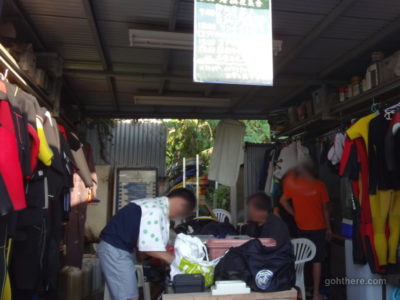 Not the best experience. 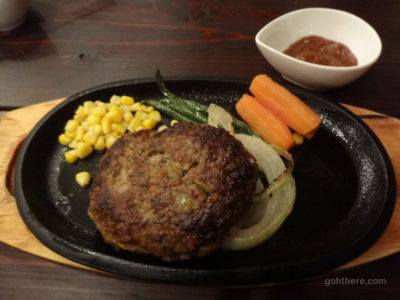 Something good for dinner – burger made from the famous Ishigaki beef (石垣牛).