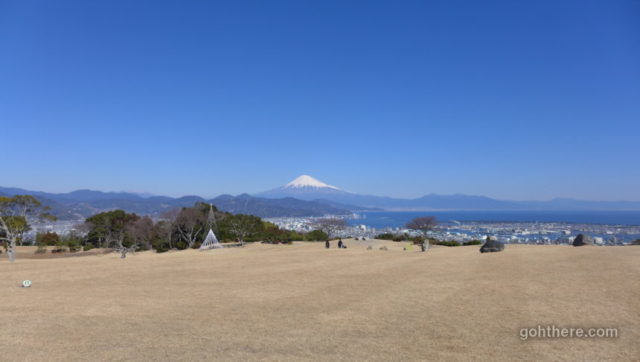 We wanted to try out strawberry-picking in Japan, and although there are plenty of strawberry farms in the nearby prefectures of Tokyo, it would be best if we could do some other activity before stuffing ourselves in an “all you can eat” session. The strawberry farms below Mount Kuno (久能山) in Shizuoka prefecture (静岡県) fit the bill perfectly, as it’s on the Tokai Nature Trail (東海自然歩道). We could do a short hike and make the strawberry farms our goal!

We arrived at the starting point at Kusanagi station (草薙駅) in Shizuoka prefecture at about 9:30 in the morning. It took only 1.5 hours from Tokyo by taking the Shinkansen train, though it’s more expensive than local train.

Just outside the train station before the main crossing was a signage board about this section of the Tokai Nature Trail. It’s not actually the main trail but a “bypass course”, starting from Kusanagi, going up Nihondaira and down Mount Kuno, then along the coastline towards the Miho peninsula. There are many beautiful places on this trail, such as the panoramic view of Mount Fuji from Nihondaira (日本平), the Toshogu shrine (東照宮) which is a designated national treasure, and the Miho pine forest (三保の松原).

For our trip this time, we would only go as far as the strawberry farms below Mount Kuno, and return to the train station by bus. It’s an easy 6 km walk in total. 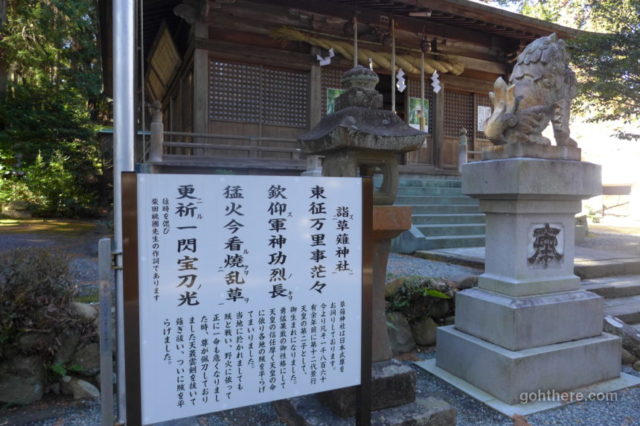 After some gentle uphill along the road for 2km, we got to the Kusanagi shrine (草薙神社). 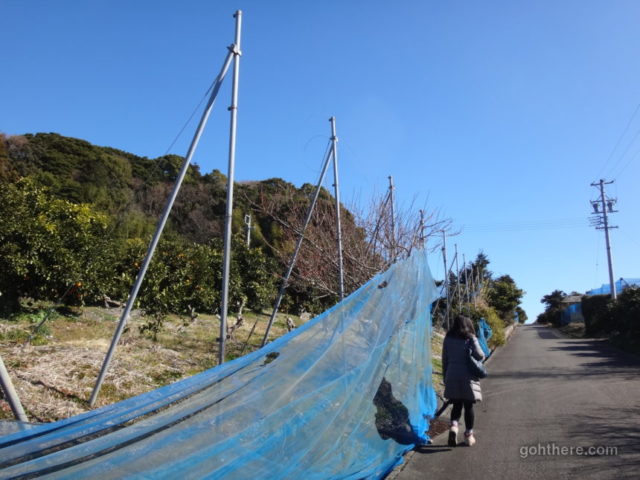 The road was somewhat busy with traffic, but as we got further up we turned into some quieter roads. The trail was not well marked, so help from Google Map was needed. 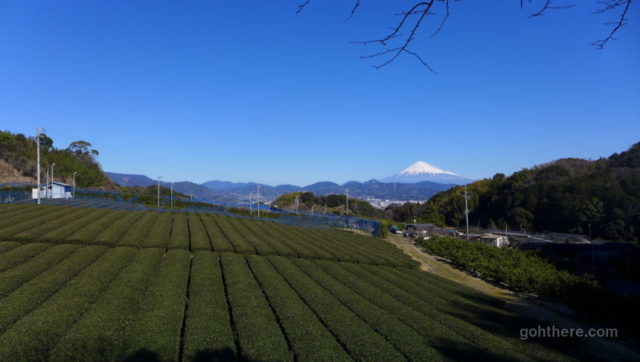 We walked past some tea fields (tea is a famous produce of Shizuoka), and soon the trail which had been on paved road so far led to a dirt path into the woods. But just before that was a great photo point, overlooking the tea fields with Mount Fuji in the background. 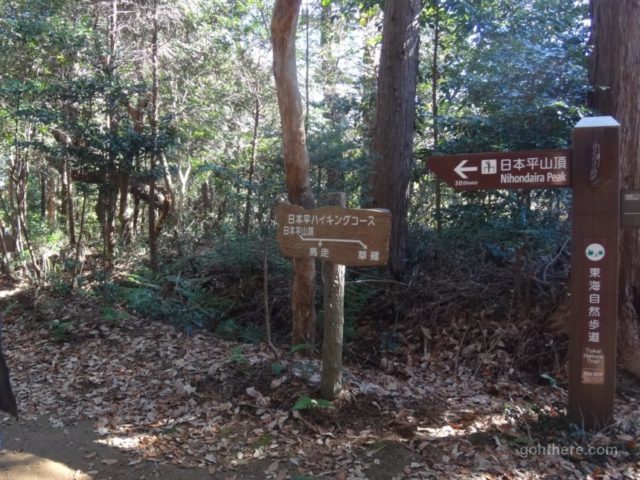 Trail through the woods. There were clear signs on where we should be heading – Nihondaira Peak (日本平山頂). 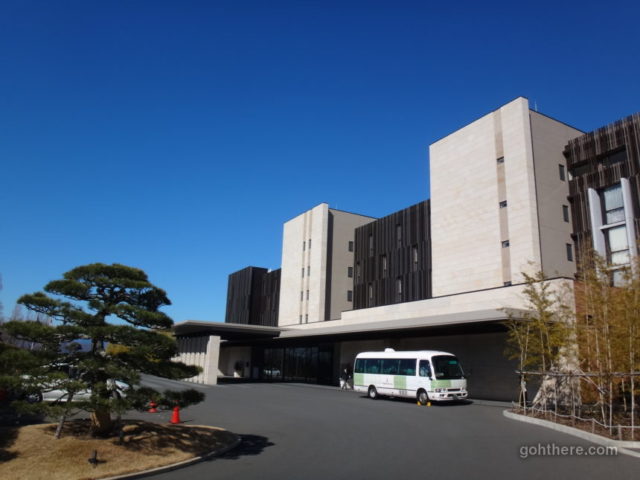 Out of the woods, but before heading to the Nihondaira Peak, one shouldn’t miss visiting the Nihondaira Hotel (日本平ホテル). It’s free to go through the lobby (you don’t need to be a hotel guest), and the open area outside has amazing view! 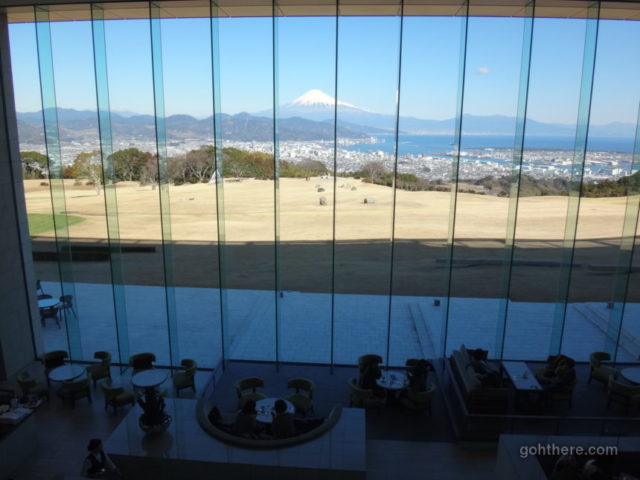 From the hotel lobby balcony. The hotel restaurant is below. This place is often used for wedding banquet because of this grand Mount Fuji view. 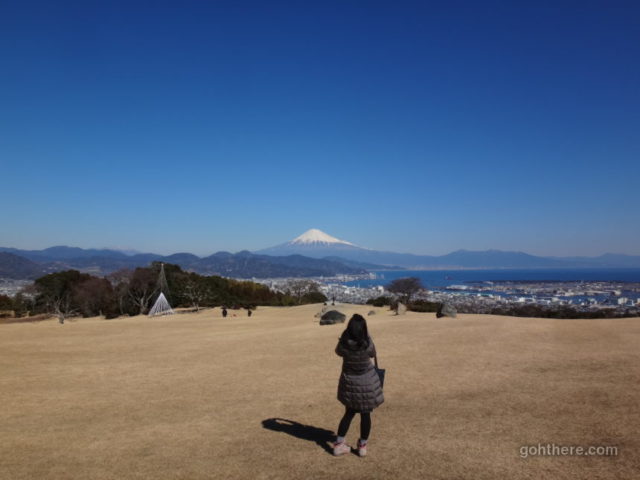 Going down the stairs and then outside to the huge lawn. During winter the grass was yellow. 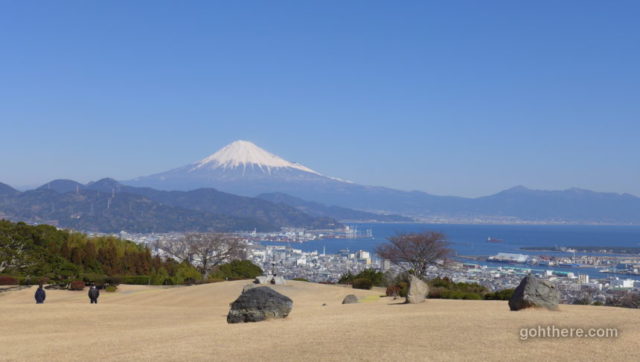 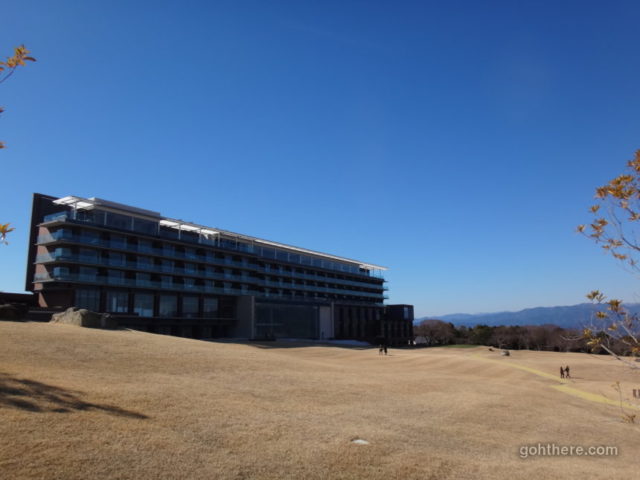 The hotel rooms on this side all have full height glasses to enjoy the view. 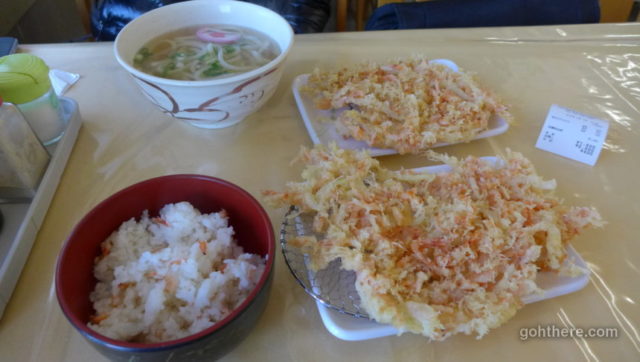 From the hotel it’s a short walk to the Nihondaira Park (the Peak is inside the park). There were several souvenir shops and eateries near the entrance / car park. It’s noticeably busier here, as most visitors come here directly by car instead of doing the hike.

We got lunch here having tempura of “sakura shrimps” (桜えび). These shrimps are a local speciality, but for this particular meal we thought the tempura was too oily. 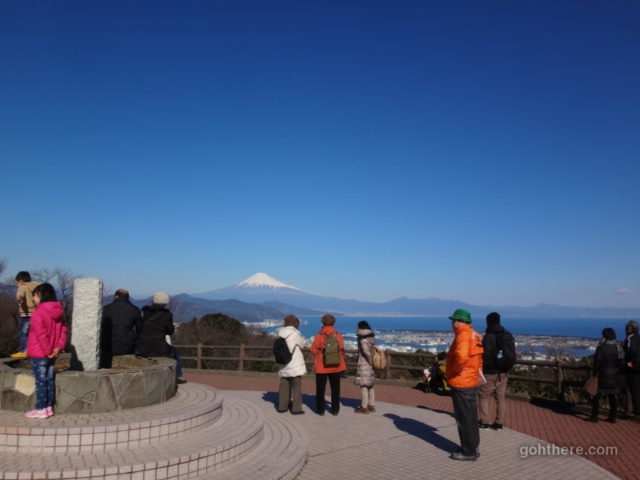 Just a little further up was the highest point, the Nihondaira Peak. The view here was also great, but we thought the one at the Nihondaira Hotel was better. 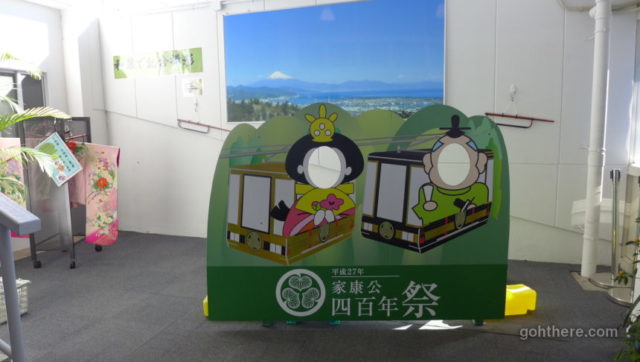 The Nihondaira Ropeway (日本平ロープウェイ) took us from the Nihondaira Peak to the Kunozan Toshogu shrine further down. There were roads but only the cable car went down that direction. 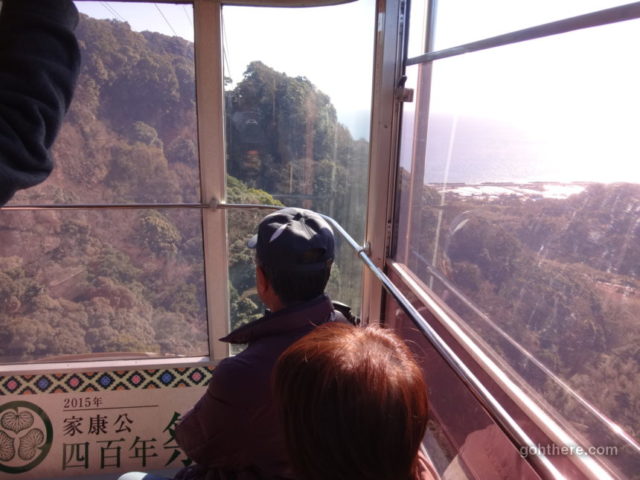 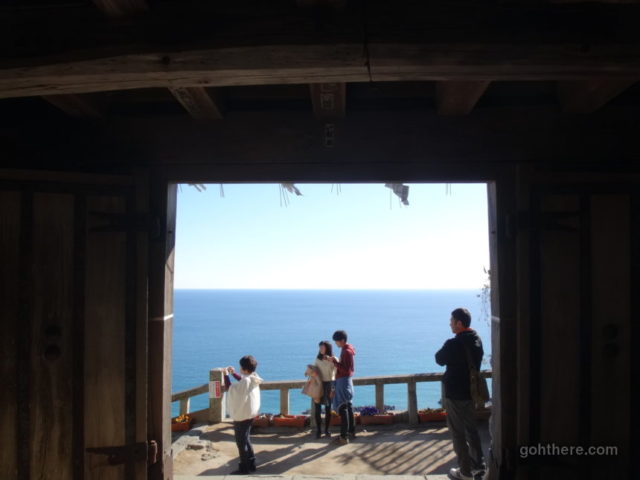 Kunozan Toshogu shrine (久能山東照宮) is also a popular place for visit, but we’d skip it this time and head for the strawberries! This was the main gate of the shrine (一ノ門), from there a long flight of stone steps went all the way down to the coast.

Some visitors came to visit the shrine the opposite way – setting off from the coast and walking up the stairs. This is the formal approach, but more strenuous (and going this direction didn’t fit our plan anyway). 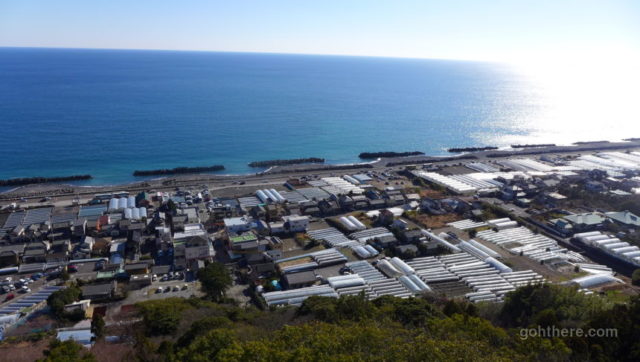 View of the coast before our descend. The rows of strawberry greenhouses were already visible. 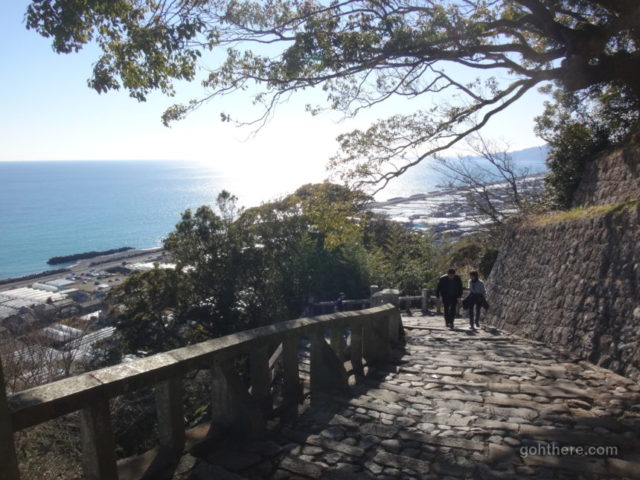 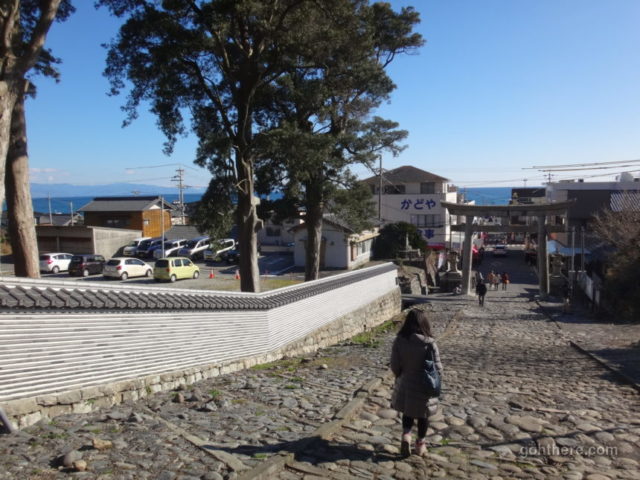 End of the approach was marked by the stone Torii gate. 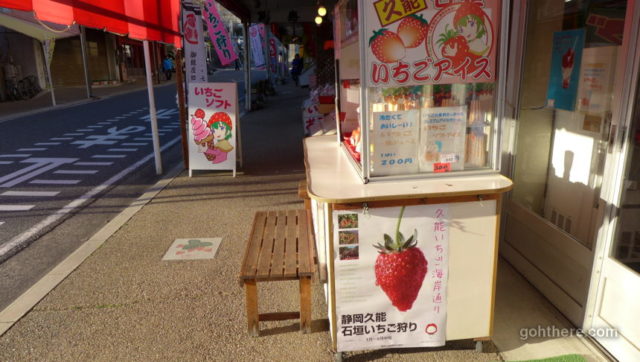 We kept going towards the coast, passing through an area with various shops selling strawberry-related snacks and goods. 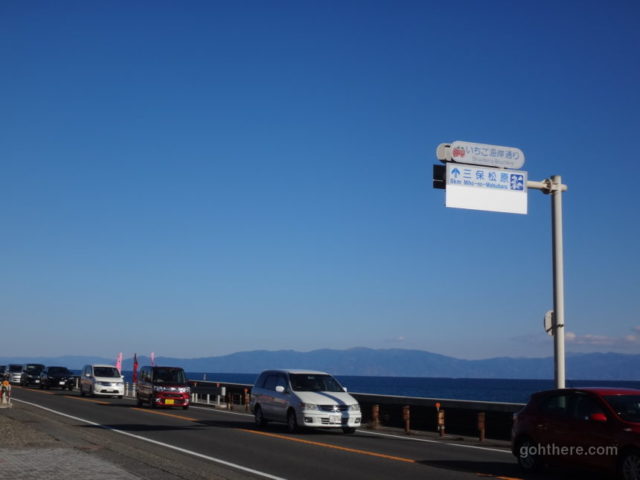 Eventually we got to a busy road next to the sea. This was the Strawberry Beach Line (いちご海岸通り). Most of the strawberry picking farms were located along this stretch. There were quite a few, and we didn’t book any in advance. We just walked along the road checking the prices of each shop displaying the “strawberry picking” (いちご狩り) sign. I recall they were pretty similar, and we finally chose Maruyoshi Farm (マルヨシ農園) as it had no picking time limit! 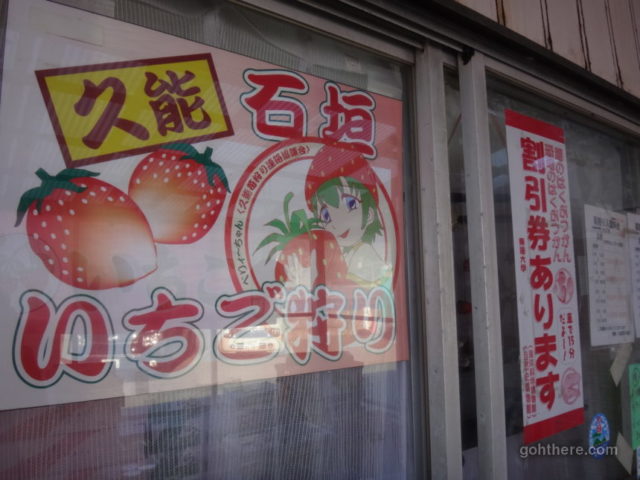 Outside the farm shop. After paying, we got on a van with a few other groups, and the staff drove us to a hillside just a few minutes away where the greenhouses of this farm were located. 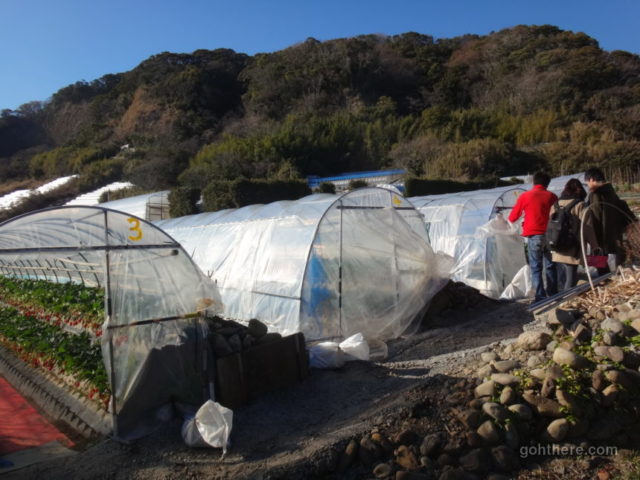 The greenhouses weren’t very big, but each group has their own! 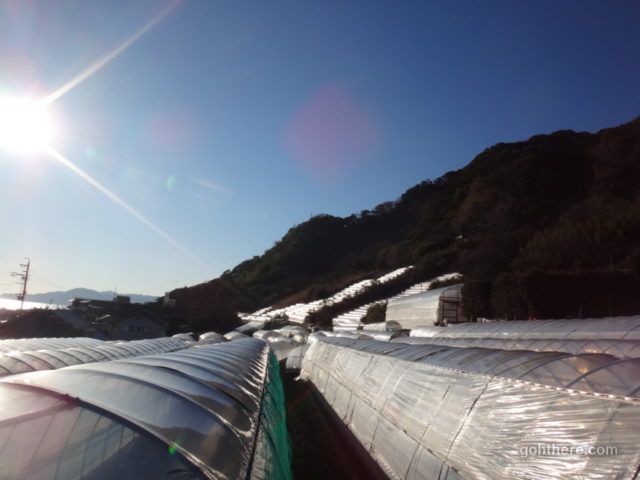 Lots of other greenhouses. Presumably they belong to different farms. 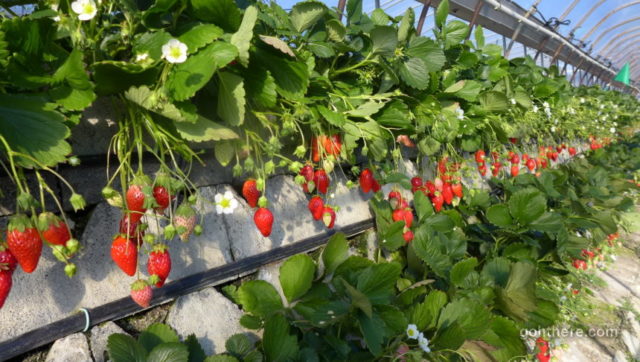 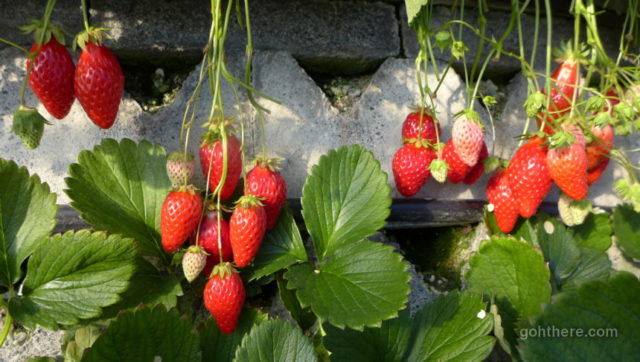 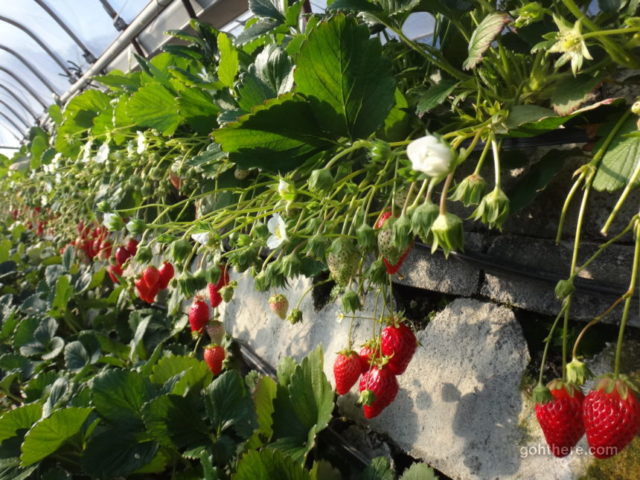 Strawberries in this area are also known as “stone wall strawberries” (石垣いちご), as they are planted on these stacked stone slabs. They are arranged like this as the greenhouses are built on the hillside.

We spent almost an hour there eating to our hearts desire, and then walked back to the shop to return the plates. We didn’t know it was part of the package but we were given a small plot of strawberry plant as gift!

The bus stop Kunozan-shita (久能山下) was nearby, but only about one service an hour, mostly towards Shizuoka train station (静岡駅). From there we took the local trains back to Tokyo, together with the strawberry plant. Though we wondered where to keep it in our apartment…