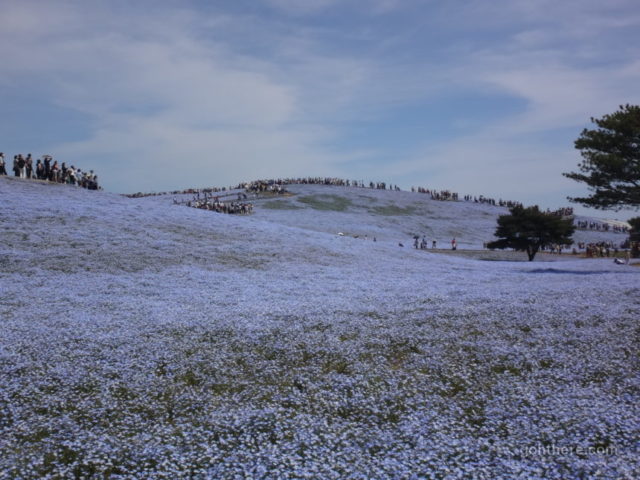 I was captivated when I first saw a photo of this – an endless carpet of blue flowers as if a extension of the sky. It’s actually a large field of Nemophila (or commonly called “baby blue eyes”), in the Hitachi Seaside Park (ひたち海浜公園), a nationally-run park in Ibaraki prefecture (茨城県). Fortunately it’s not too far from Tokyo, and can be visited as a day trip. Naturally for flower viewing, it can only be done in a specific time of year, and for these little blue flowers, the best time is between end April and mid-May. Longer than the short-lived cherry blossom, but this is also around the Japan “Golden Week” holiday, so it would be tough to avoid the crowds.

Unable to avoid the holiday, the best we could do was getting there as early as possible. Getting there from where we live would require 4 changes of trains (express train on the Joban Line might require fewer changes, but we always travel cheap with local when possible!), plus one free shuttle bus ride in the end that takes you directly to the park (these buses only run during the peak flower seasons). In total just over 3 hours of travelling time. The first leg of this would be from 5:41 am! 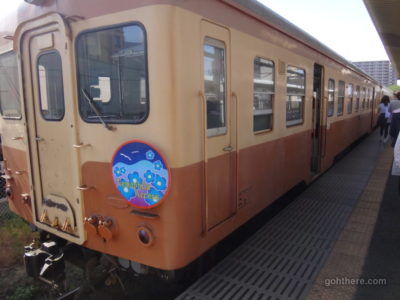 5th leg of the train journey – from Katsuta (勝田) to Ajigaura (阿字ケ浦) was on this rural line called Hitachinaka Kaihin Minato (ひたちなか海浜鉄道湊線). To celebrate the flower season, note the Nemophila badge in front. This was a half an hour ride through the countryside. 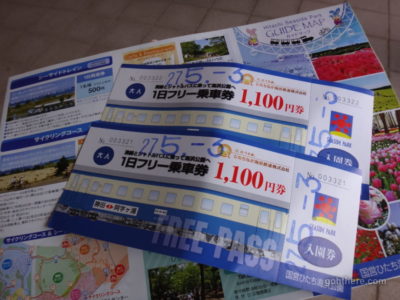 Combo ticket with day pass on the line as well as park entrance fee. 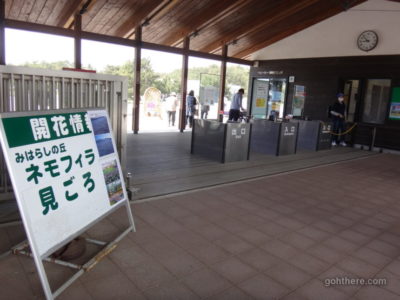 Entrance at the Hitachi Seaside Park. The board said it’s now the best viewing season! (みごろ) 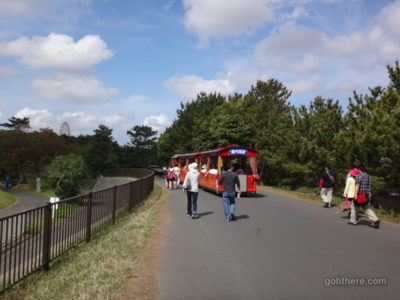 The Nemophila field was a relatively short walk away. 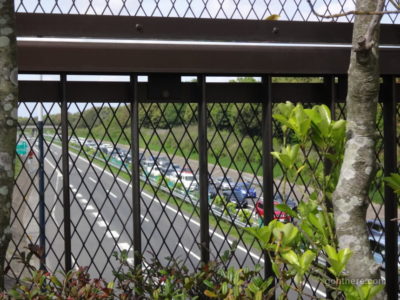 With such early start we arrived at the park around 9 am. But look down there at the long queue of cars waiting to get in! 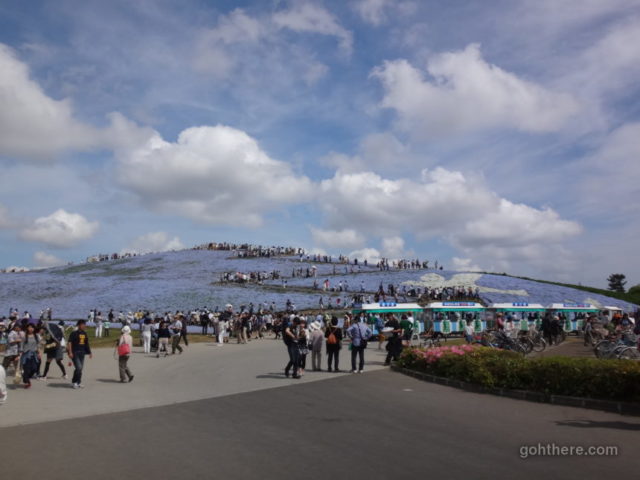 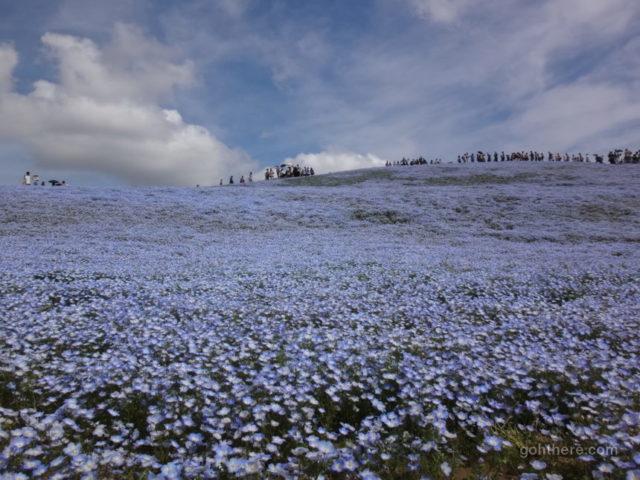 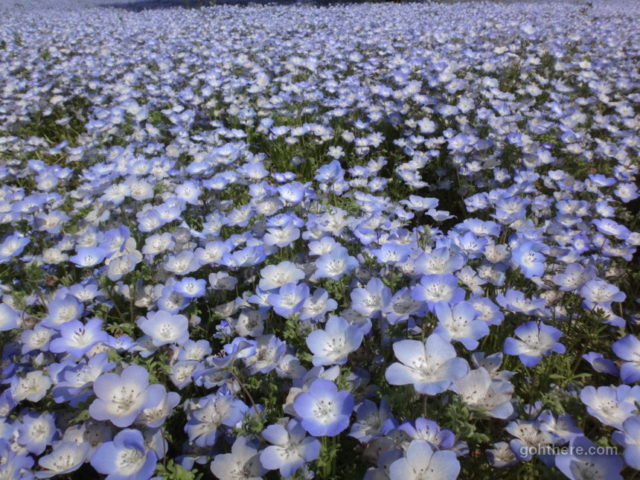 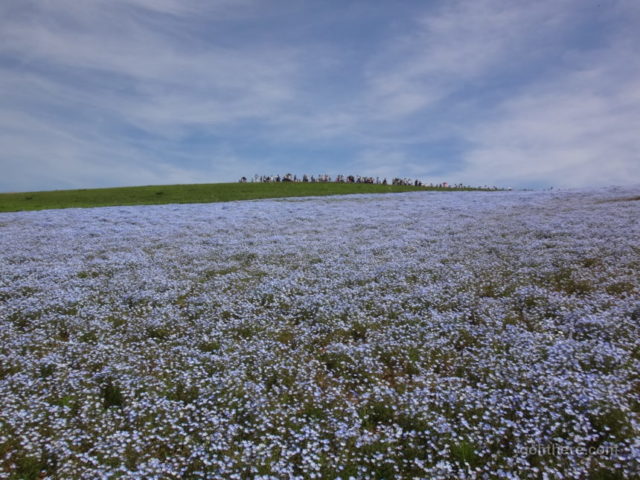 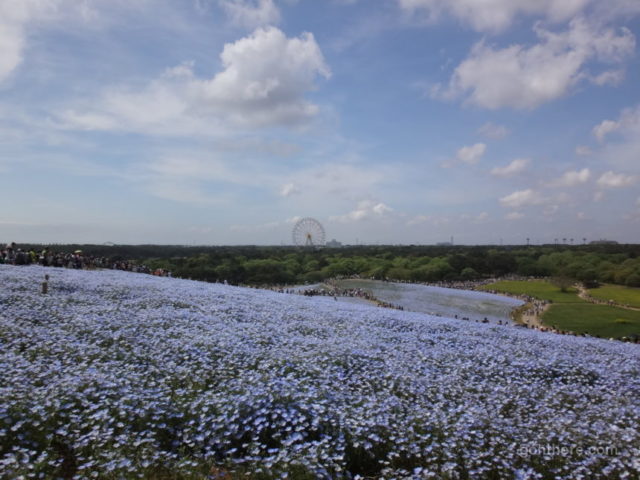 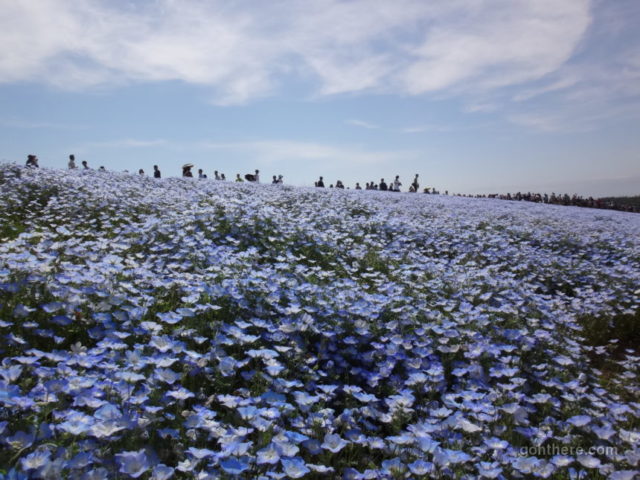 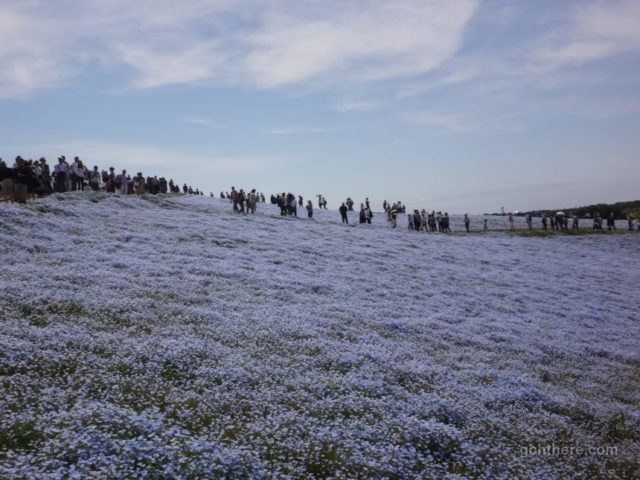 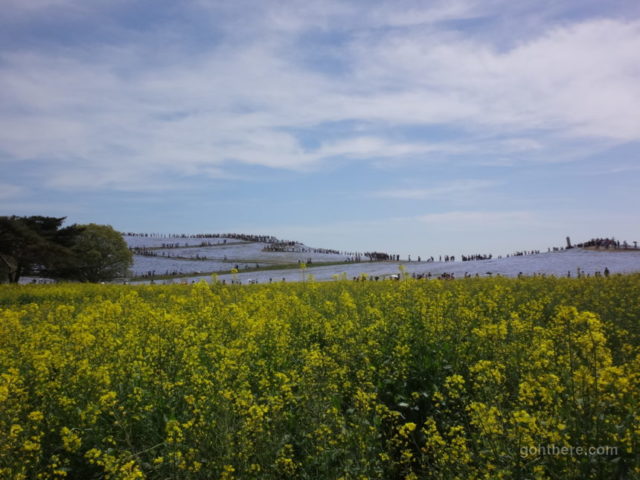 After taking enough photos, we bought some snacks from the several food stalls next to the fields. There was the mandatory “Nemophila soft serve ice cream” – the Japanese can combine anything with soft serve ice cream – though I opt for the more conservative chocolate flavour. Then we took a walk around the park.

Although the Nemophila field was packed with visitors, the rest of the park was relatively stress-free. It’s huge, at 200 ha, it would take at least an hour just to walk one lap in the park (not counting anything in the middle!). There’s a 11 km long cycle course, a big grassland in the middle for picnic, an amusement area with rides… and a little train that runs around the park if you think it’s too far to walk. There are many of these nationally-run parks (国営公園) in Japan, and all of them seem to be on this scale. 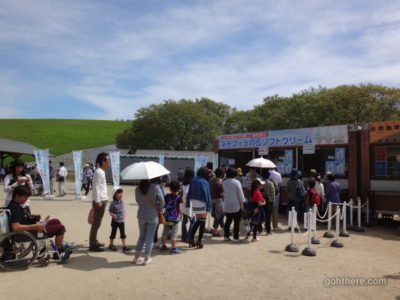 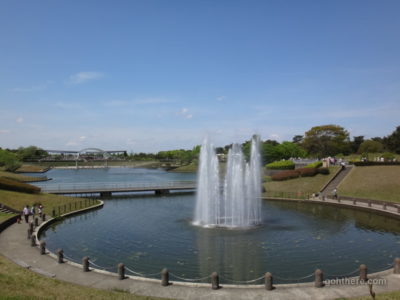 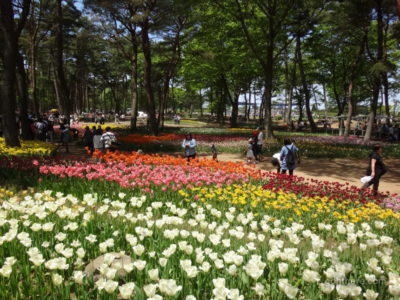 There were other flower fields too. This one was tulip. 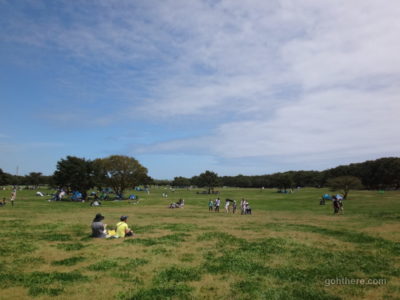 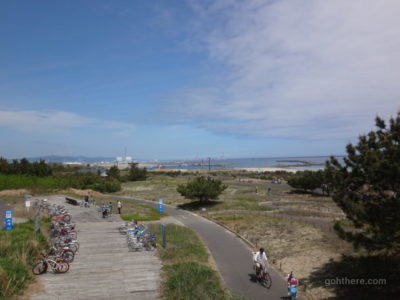 Part of the cycling course. They have lots for rent. 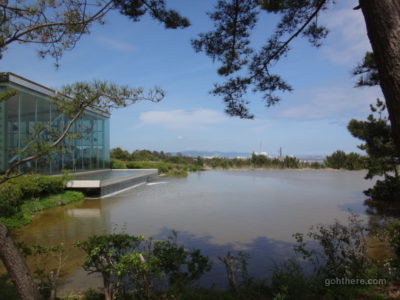 Pond outside one of the park’s restaurants. 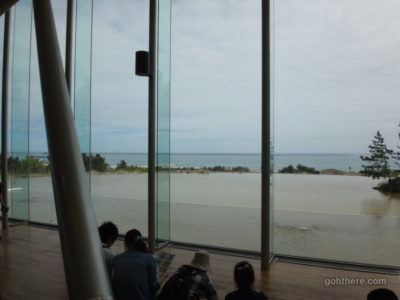 One side of the park is by the sea. The view was good.

The park would be a good place for family to have a picnic and spend a day, but a couple of hours was enough for us. There are actually a few other attractions along the Minato Line that brought us here (we had a day pass); as trains were pretty infrequent, we figured we had time for one, the Naka Minato market (那珂湊市場). It’s a large seafood market, there are restaurants as well as stalls selling freshly cooked seafood, great for lunch after the park visit. 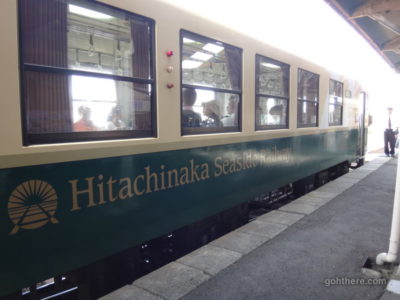 The station for the market was just 15 mins away on the train. Then it was another 15 mins walk. 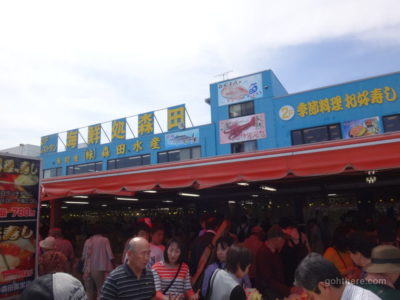 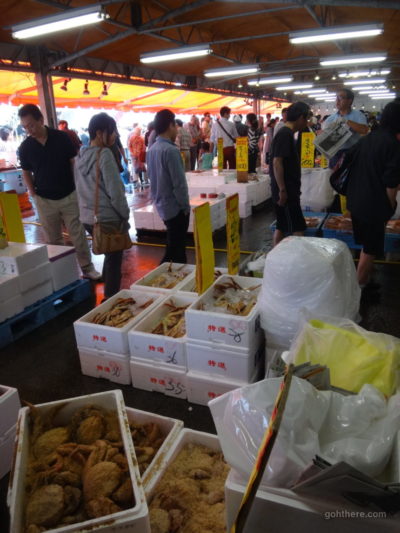 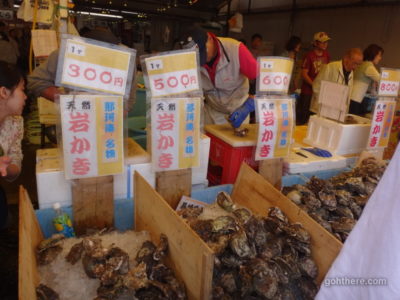 Local oysters. You can eat them raw right there 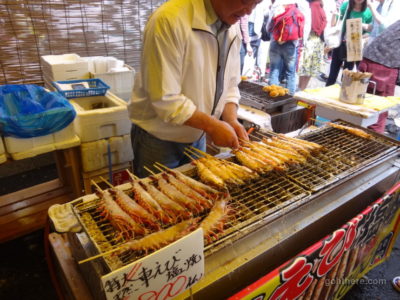 Grilled prawns. They were delicious. 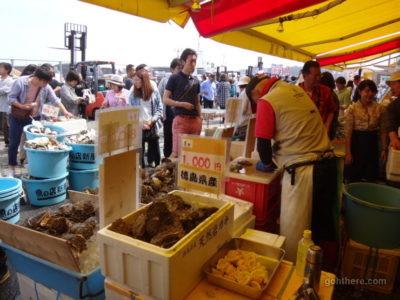 As it would take another several hours to get back to Tokyo, we left just after 2 pm. It’s nearly 6 pm when we stopped by Ueno (上野), as it’s about time for an early dinner before finishing today’s trip. 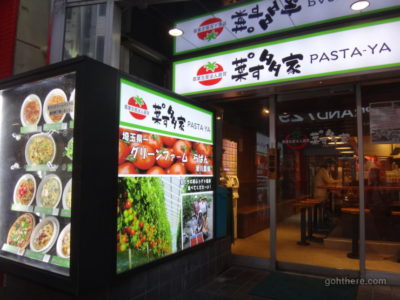 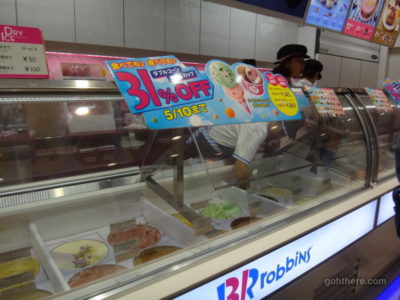