Due to the slight mishap yesterday, we ended up with a bit of extra time to spend in Kanazawa, before our bus around 1 pm to Shirakawago. At a leisurely pace we had breakfast and then checked out from the hotel, got ready for the cold rain outside and then headed to Nagamachi. 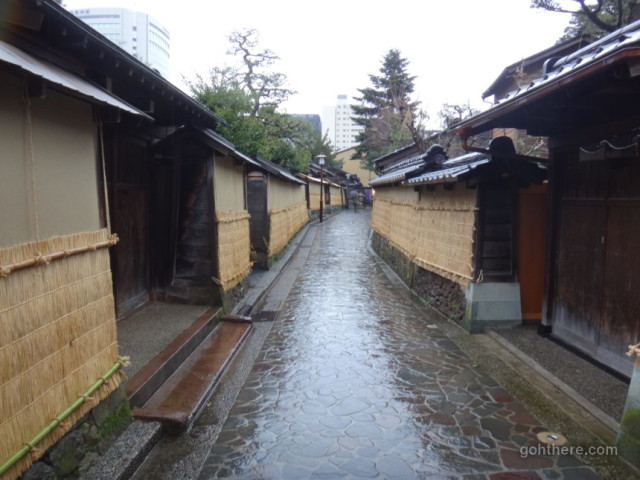 You can find several old samurai residences and some nice side streets. The straw mats on the wall are traditionally put up during winter for shedding snow and protecting the wall. 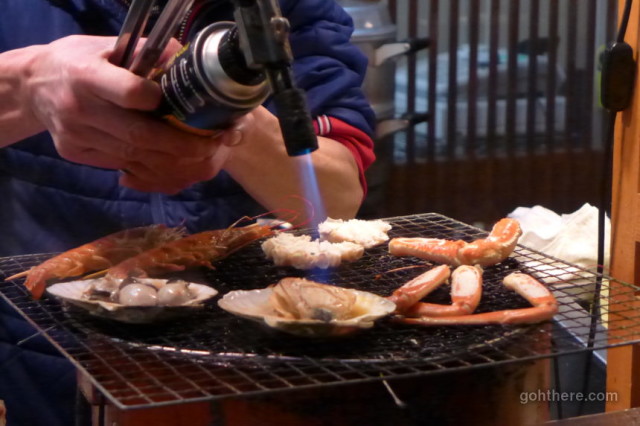 We went back to Omichi Market again for lunch, this time giving the raw stuff a pass and went for grilled seafood for some warmth.

The bus ride to Shirakawago took about 1 hour. We were greeted by heavy snow, and a lot of tourists! 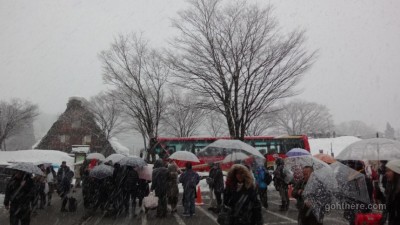 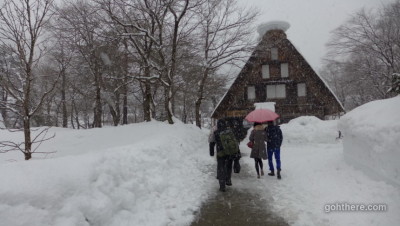 The tourist information centre was crowded with people taking shelter. We put on our rucksack covers and waterproof jackets and then headed out – firstly to grab a quick bite (some hot snacks made with local Hida beef), and then to find the guesthouse that I had made reservation for. 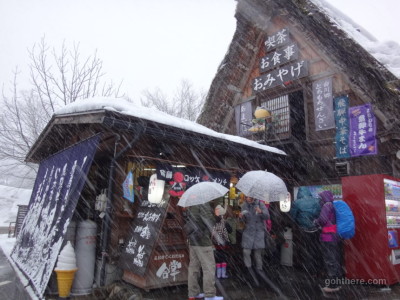 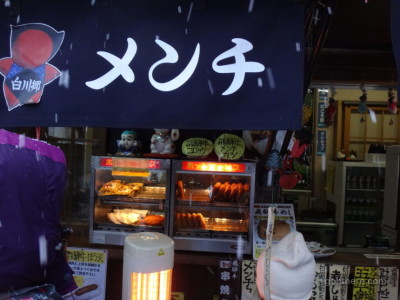 From the tour bus station you will cross a long footbridge to reach the Shirakawago village. The bridge has a name – Deai-bashi (であい橋) (literally: meeting bridge), presumably because it’s quite narrow so you’ll meet someone opposite on the way. It’s a beautiful view with the snow. 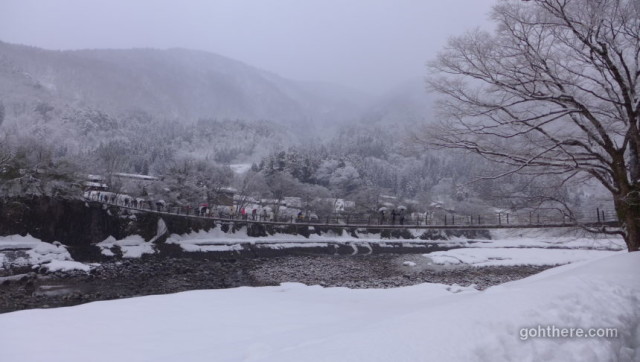 The guesthouse we would be staying at was called Bunroku (ぶんろく). It’s near the west side of the village, which was just about 10 minutes’ walk after crossing the bridge.

It’s hard to avoid the crowd in Shirakawago during daytime. The best way is to stay there overnight so you can get some quiet time from late afternoon, after all the day trip tourists are gone, until later next morning before the next batch comes along. And being able to spend a night in one of those traditional village houses is certainly worthwhile. The thing is there aren’t that many places available (and no big hotel there of course). Our visit was during a long weekend, and I was lucky to be able to make a reservation may be just a few weeks before. 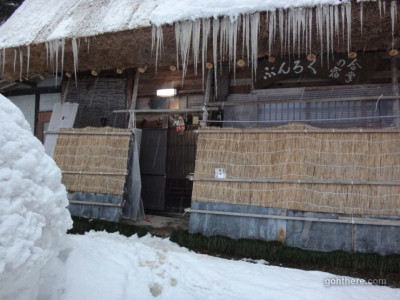 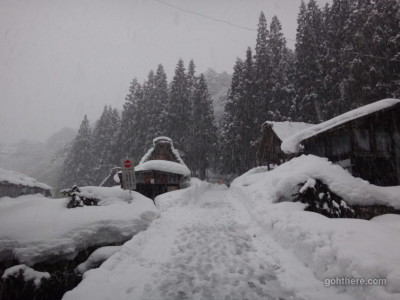 It was a little after 4 pm and after warming ourselves up a bit in the room, we braved the snow outside again, heading for the observation deck that was a bit of a trek away up the hill. According to the map, there was a shortcut not far from our guesthouse, though that’s supposed to be closed during winter. I went to take a quick look and indeed it was blocked by a gate and a trail seemingly unmaintained for some time. 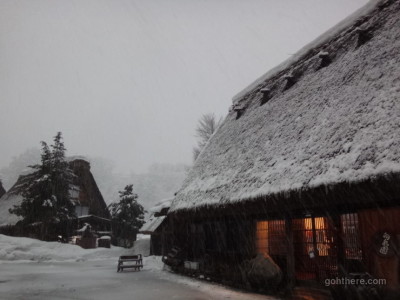 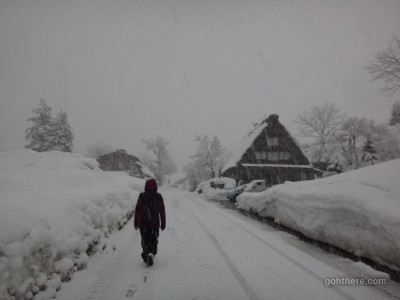 So we took the main road and walked up. With the day trippers gone, there were hardly anyone. After walking in heavy snow (at least to us people used to living in warmer climate) for just over half an hour, including some time lost wondering whether we were on the right way, finally we reached the observation deck. A plastic tape was put across the entrance with the sign saying something to the effect of “no entry”. Then car pulled in, a Japanese couple (obviously tourists as well) stepped out, also surprised to see the sign, but they ducked under the tape and went in anyway. So we followed. 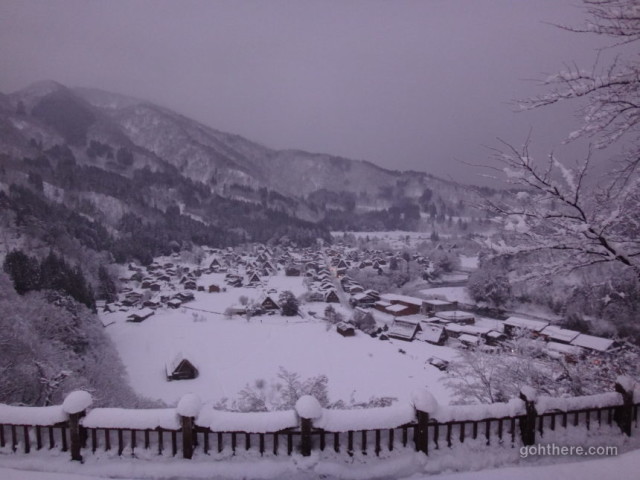 By the way, Shirakawago was used as the model setting for the brilliant anime “Higurashi No Naku Goro Ni (ひぐらしのなく頃に)”. This view in summer time could be seen in the anime quite often. 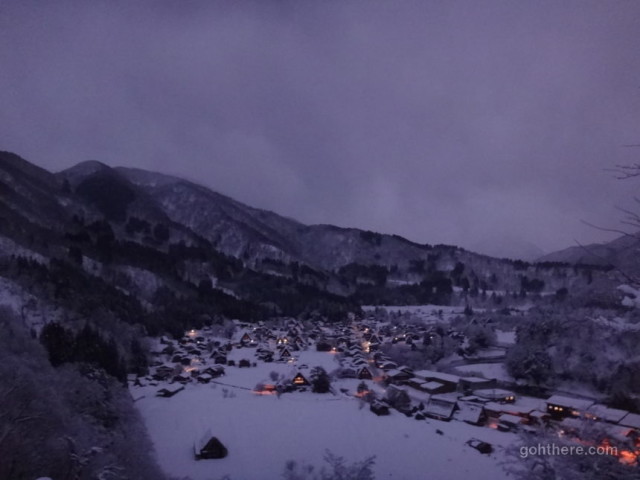 We left just after sunset. The road from the observation deck on the hill to the main road was very dark, though I was well prepared with a head-lamp. We arrived back at the guesthouse on time for dinner. 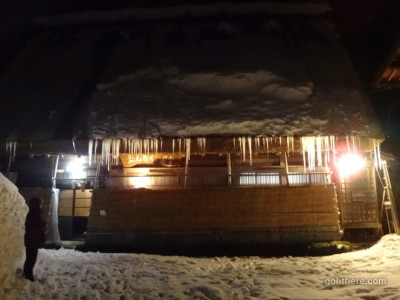 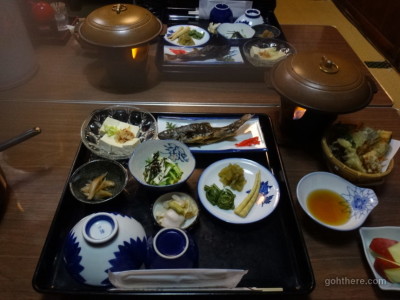