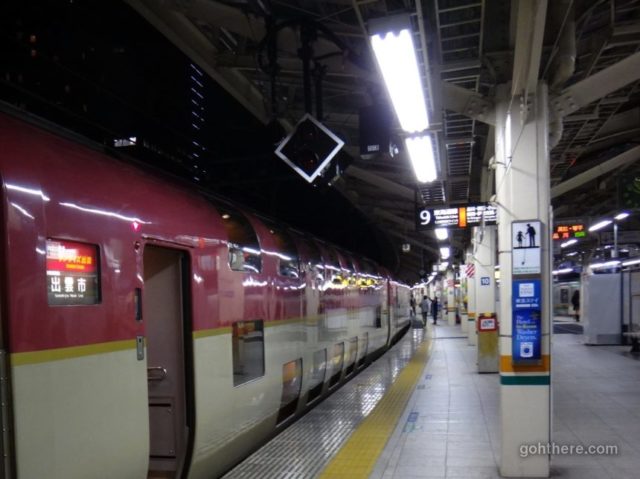 For long distance travelling in Japan, the once prevalent overnight sleeper trains are now near extinction, and the fast Shinkansen bullet trains, domestic flights, and bargain overnight highway buses are the norm. As of mid-2015, there remained only 4 regular overnight train routes in Japan.

But instead of purely as a means of transport, they themselves have become the attraction for travellers – an opportunity to ride the special trains unique to these routes, experiencing a night’s sleep in a private room onboard, and taking a shower on a moving train is certainly something out of the ordinary.

From Tokyo, the “Cassiopeia” (カシオペア) trains serve the Hokkaido route, while the “Sunrise” (サンライズ) model trains go to Izumo (出雲) in the Sanin (山陰) region, as well as Takamatsu (高松) in Shikoku (四国). We had not yet explored the Sanin region before, so this was a great opportunity to visit there and try out an overnight train journey in Japan for the first time.

Setting our sight on the Sunrise Izumo was only the beginning. Booking tickets for it turned out to be an adventure on its own. The Sunrise train has 5 room types plus one extra type of sleeping arrangement:

Despite the general decline in overnight train travel, but perhaps because of the rarity, the Sunrise trains are actually pretty popular by travellers. While single rooms (except the deluxe ones) are quite abundant (Single and Solo totalling 100 per train), travelling with my wife I of course wanted to get the twin type – and these are much rarer. Adding the fact that our trip had to be over a weekend (as usual thanks to my company’s lack of vacation days), it would be tough to get one of these elusive twins.

You might doubt how difficult that would be in these days of booking everything online. But in Japan lots of train routes are still not possible to book online (or phone), and you have to physically buy tickets at the train station counter (for JR that’s the Green Counter (みどりの窓口)). And to add to the fun, many ticket types are only released for booking exactly one month before the travel date and at exactly 10 am. There are tales of Japanese coming up with strategies about which stations to go to and how to queue at the right time so they could be at the counter exactly when the tickets are released.

Given that I do have to work during normal office hours, this is not a game I could play. Fortunately there is another trick. If the type of train you wish to travel on is included as part of a travel package by any travel agencies, then you can book the package (which can be done earlier than one month), and the travel agent would basically do the leg work for you to book the tickets when they are released. Whether they physically do that (unlikely) or have some special deal with the train companies to reserve a portion of the tickets, I’m not sure. For popular tickets, there’s still no guarantee that the travel agent can get it for you – and you are allowed to cancel the whole booking.

There’s a trend to offer more freedom in these travel packages, with some barebone ones really just include the outbound and inbound transport and hotel stay. Some of these are available to book online, but for most that allow customisations, your only way is still to physically head to travel agency office (by now you probably gathered I hate not being able to do things online). The travel package I found most suitable was by JR Tokai Travel – it included outbound transport by Sunrise Izumo overnight train, at least one night of hotel, return transport by a combination of express train and Shinkansen, and some other bits like local bus pass. You’re allowed to extend your stay, and the good thing was you could choose your own hotel after the first night – the catch with these travel packages is that they often only offer a few expensive (but not necessarily high quality) hotels, and with this package only the first night was “mandatory”.

So this was what I went through to sort everything out – I made an initial visit to the travel agency as their brochure wasn’t entirely clear, so I had to talk to someone to find out the details, what could be customised and what not; then I made another visit to make the booking, and another one when I wanted to make a change to the accommodation. After that one month mark and the ticket “lottery” result was out, they gave me a call to tell me they weren’t able to get the twin room ticket, but they were able to get me a “Single Twin” room which was my second choice. After my confirmation I made a final visit to collect all the paperwork including the tickets (Japanese love paperwork, even for travelling). I’ve relied on the internet for arranging my travels since however many years ago, and all this “visiting the travel agency” just like going back in time.

The Sunrise Izumo departs every night from Tokyo Station at 10 pm. 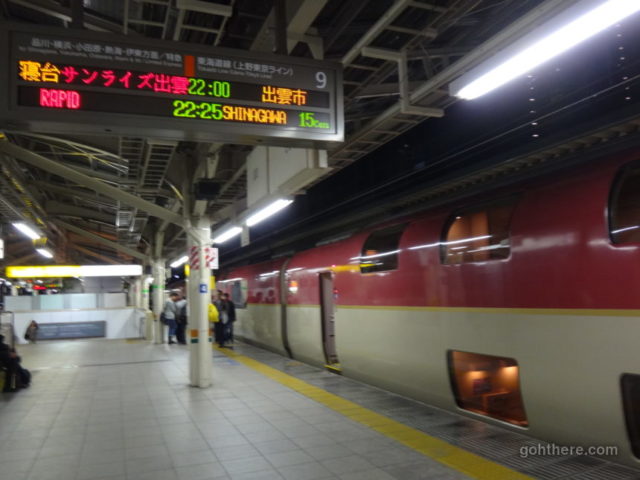 With its red colour, double-decker windows and soft room lights, it just looks so distinctive compared to the other commuter trains. 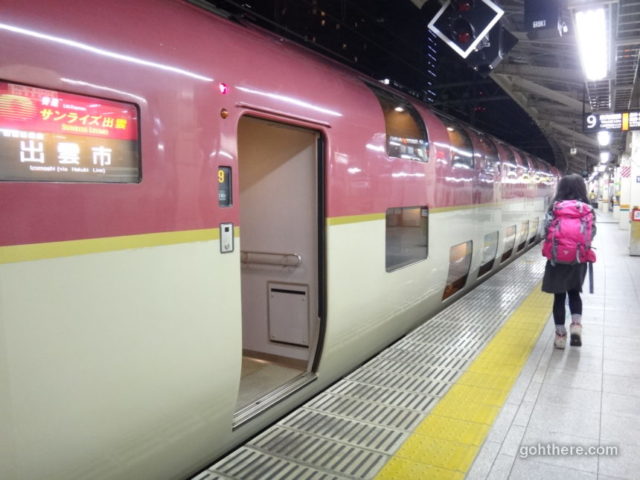 Heading to our carriage. 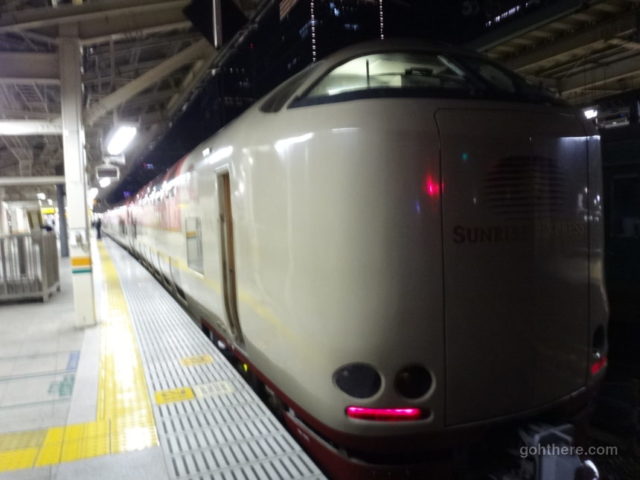 Before departure, took a snap of the front of the train. 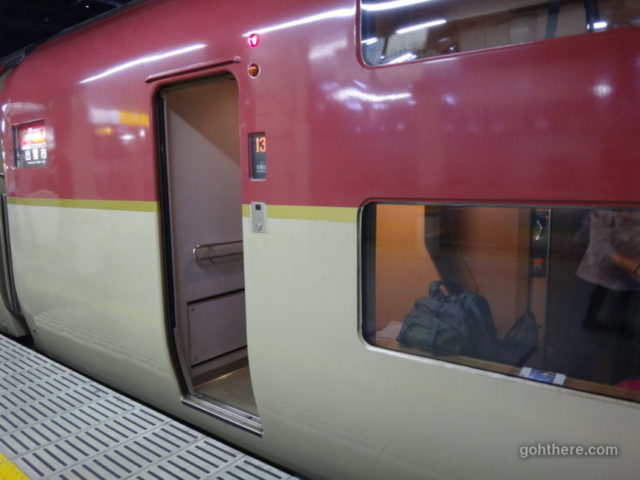 This was “Single Twin” room we had. This room type has more verticle space as it has an upper level bed. 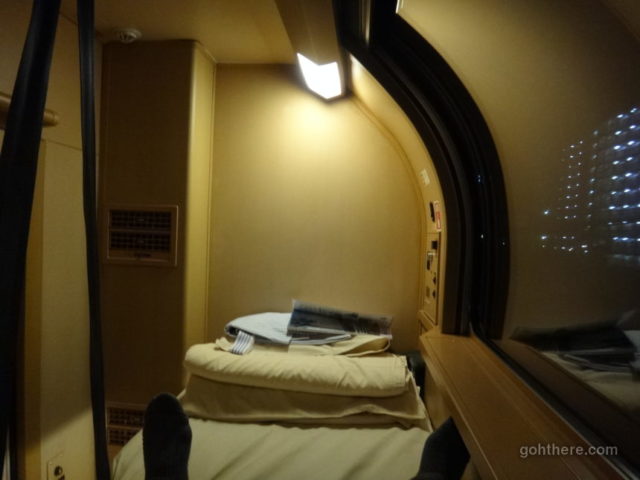 Inside the Single Twin room, on the upper level bed. It’s suspended by a belt as seen on the left. 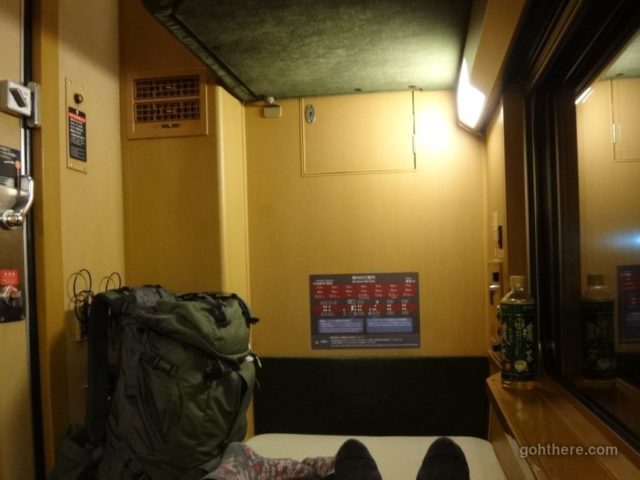 The room was small but cozy and clean. 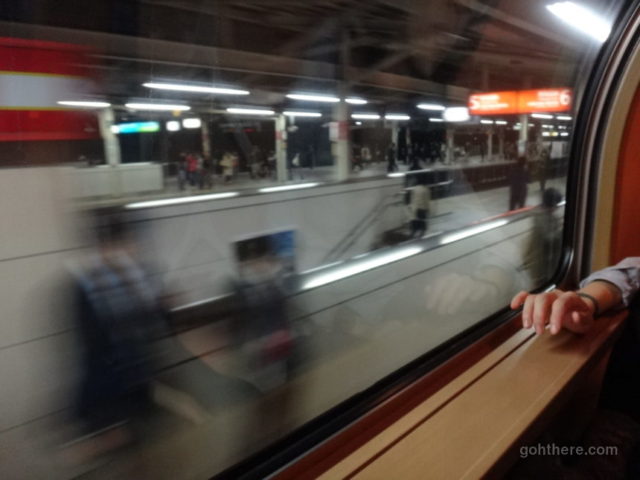 View from the upper level as the train sped past the non-stopping stations. 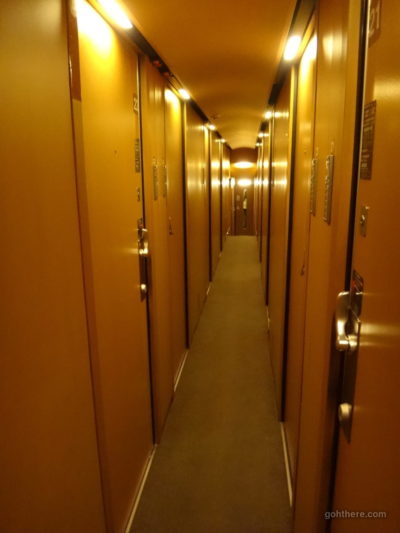 After settling down in our room for a while, we went out to explore the rest of the train. 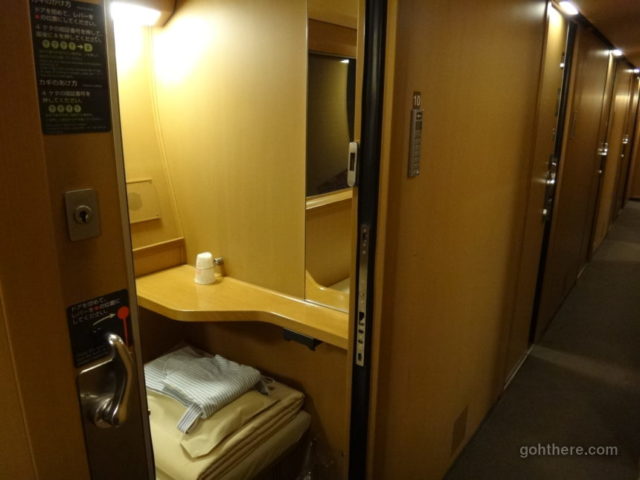 We had a tough time booking the twin room as the were so few of them. For single rooms though we found quite a few of them empty. 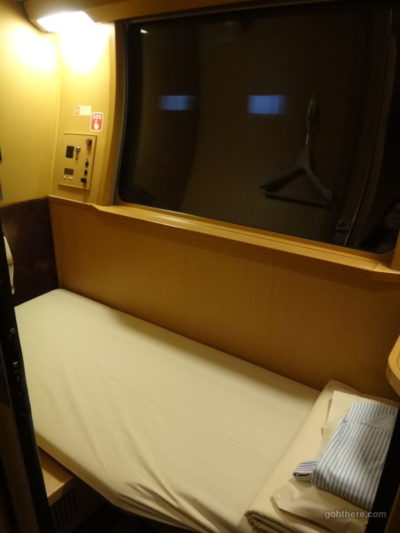 And we went inside to check it out. 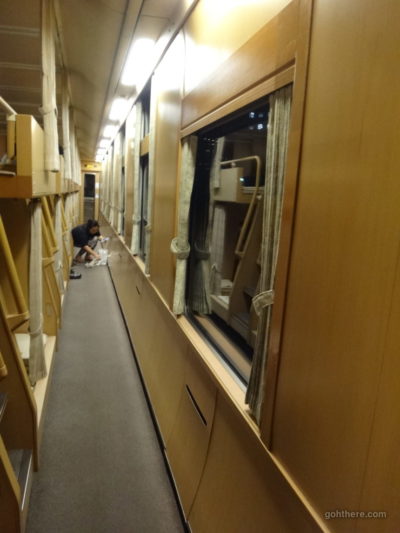 This area was for the “Stretch Seats”. I couldn’t take picture as there were people on them, but you can tell they are kind of like open bunk beds. 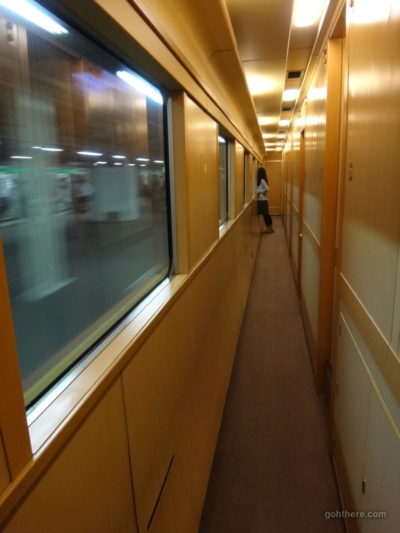 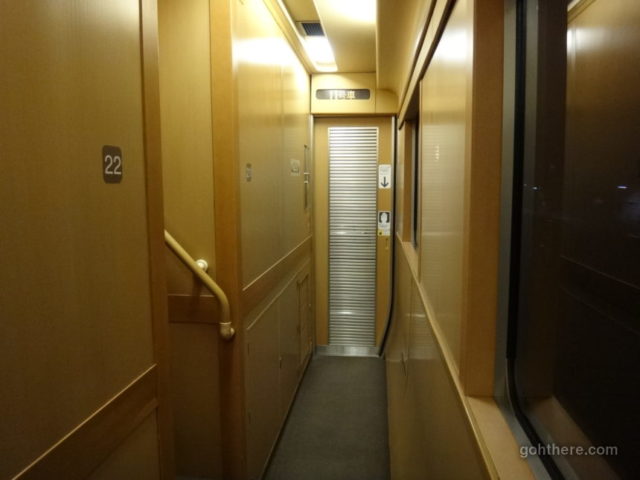 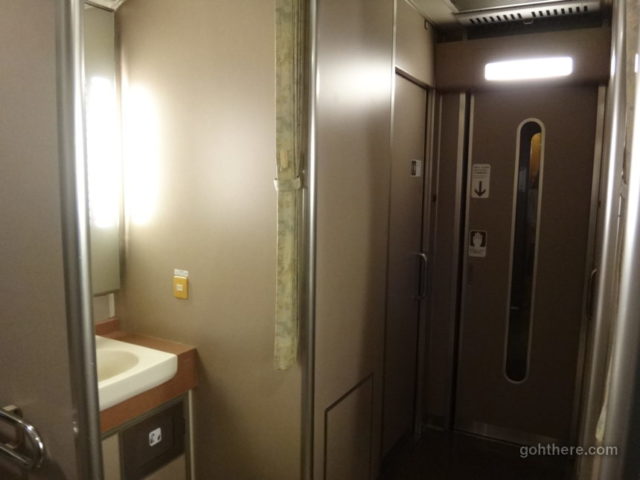 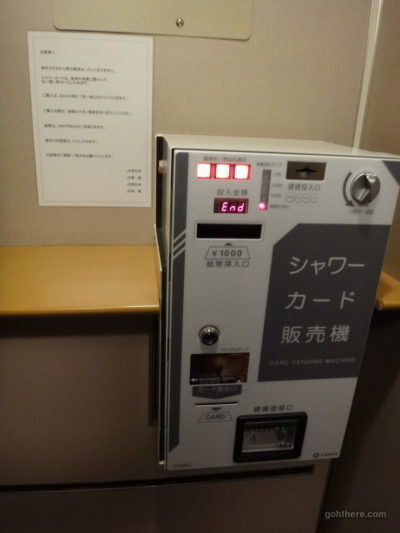 Having a shower on the train would’ve been fun. You need to buy a ticket from this vending machine to use the shower, but the number of ticket is limited – we were too late. 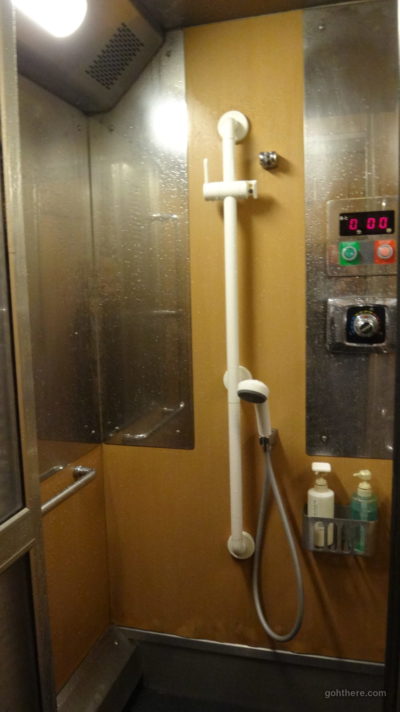 As consolation, a picture of the shower. Notice the timer display – a ticket gives you 5 minutes of water. 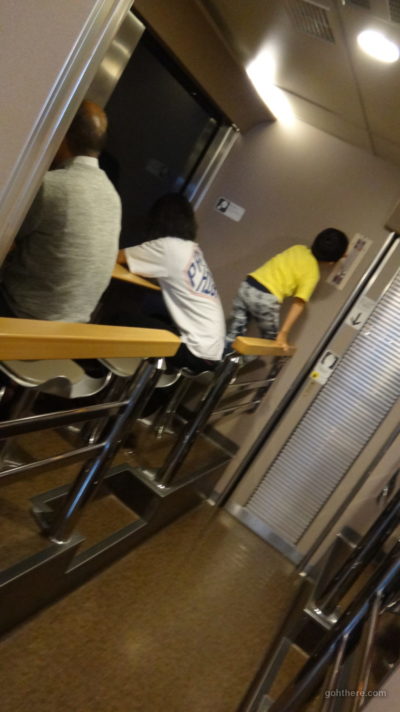 The lounge area is pretty small. 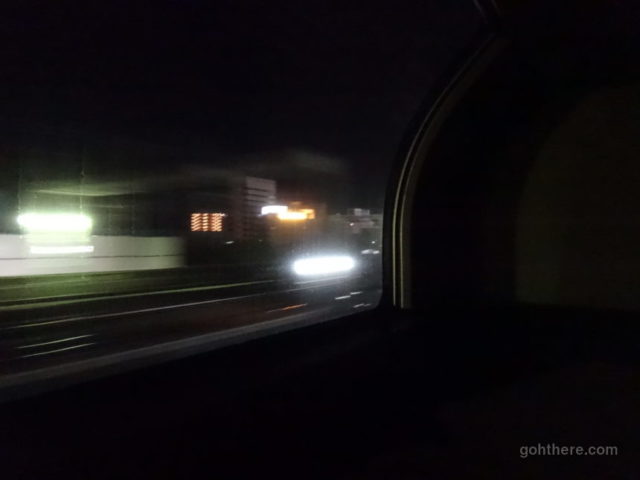 Around 1 am, normal train service had already finished for the day, while our train was making its way past deserted stations. 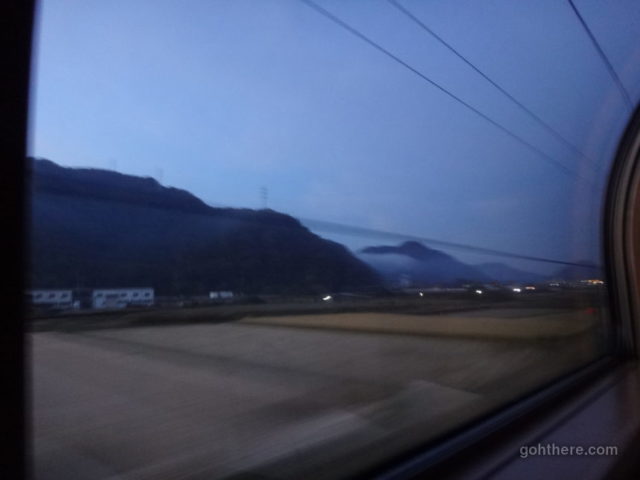 I had no problem sleeping on the train, but I got up already at 6 am to enjoy the scenery. 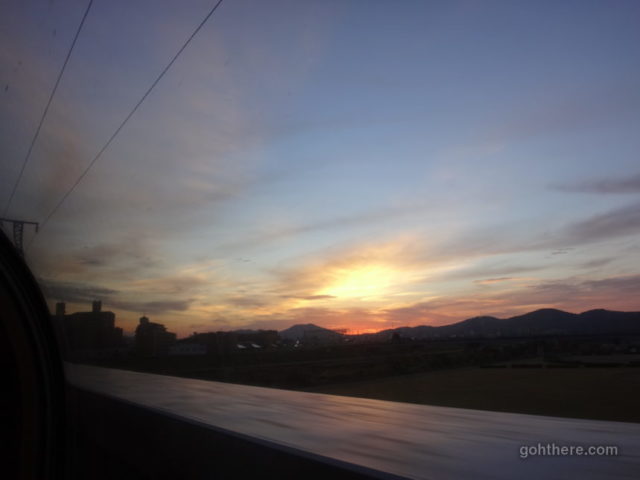 Seeing sunrise on the Sunrise Izumo! 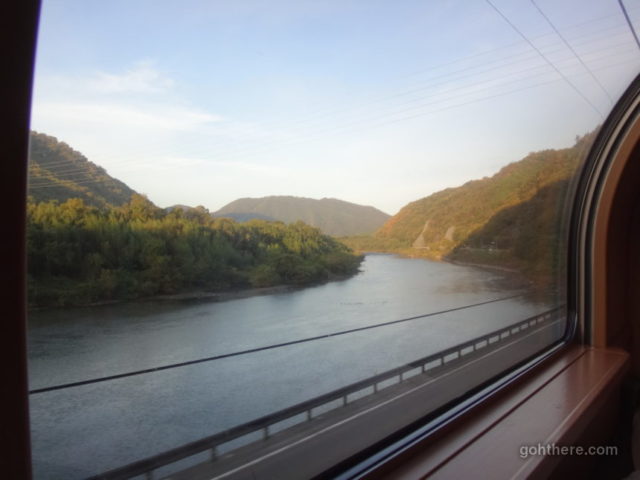 The Sunrise Izumo train is actually linked to Sunrise Seto when departing from Tokyo. Once reaching Okayama at around 6:30 am, the two halves go their separate ways. Izumo heads north towards the Sanin region next to the Japan Sea. This section is through a mountainous area, most of it following the river valley, with some excellent views. 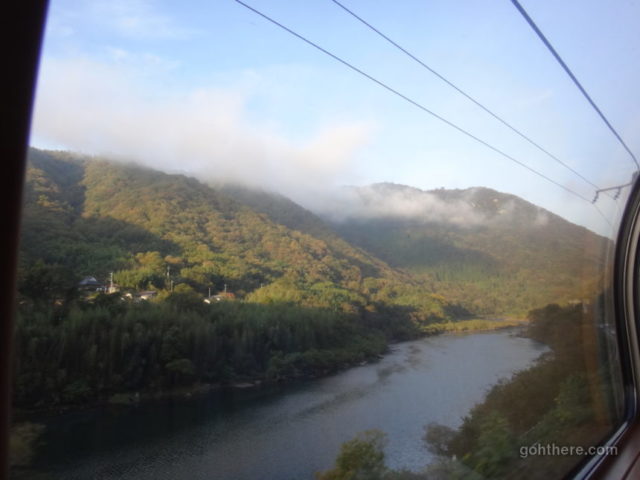 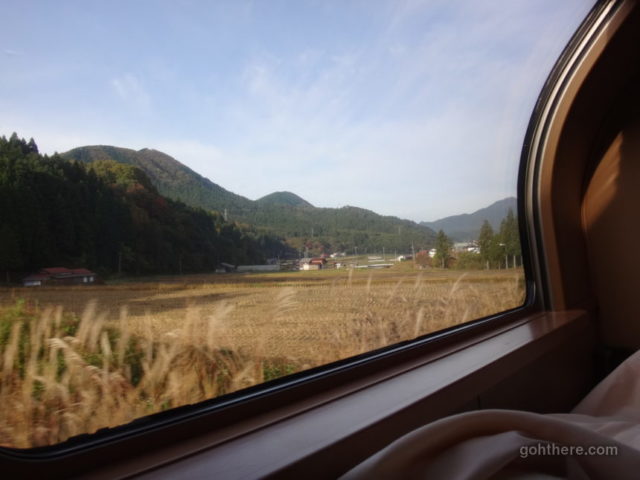 Enjoying the countryside view while lying on the bed. Brilliant. 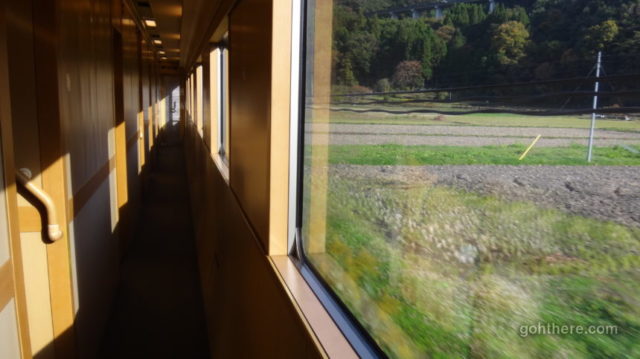 Taking a stroll on the corridor again. 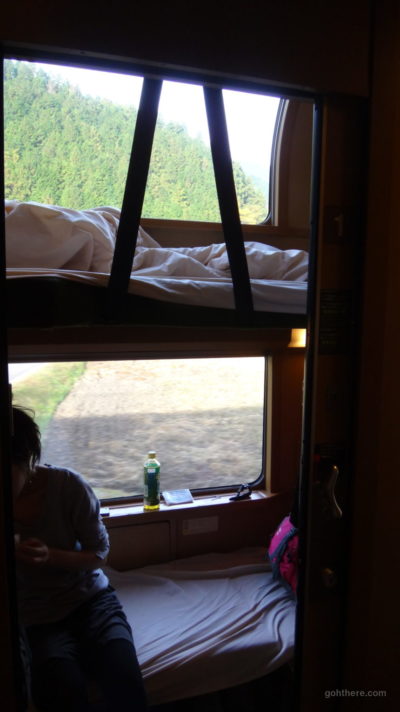 Seen from outside our Single Twin room with the door opened. 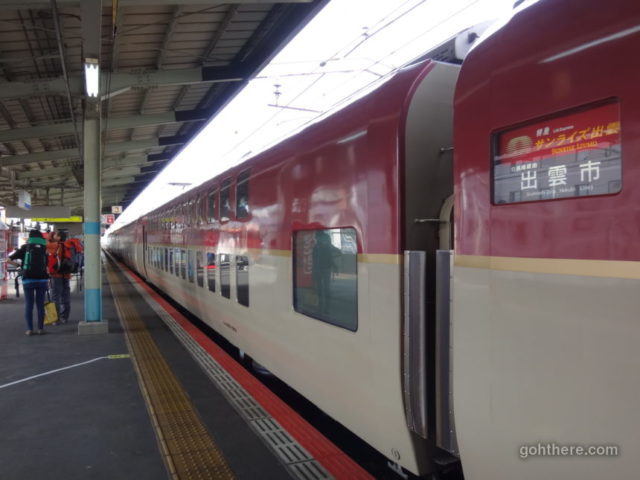 The train would be terminating at Izumo City (出雲市) but our plan was to got off at Matsue (松江) for today. We would visit Izumo later on. 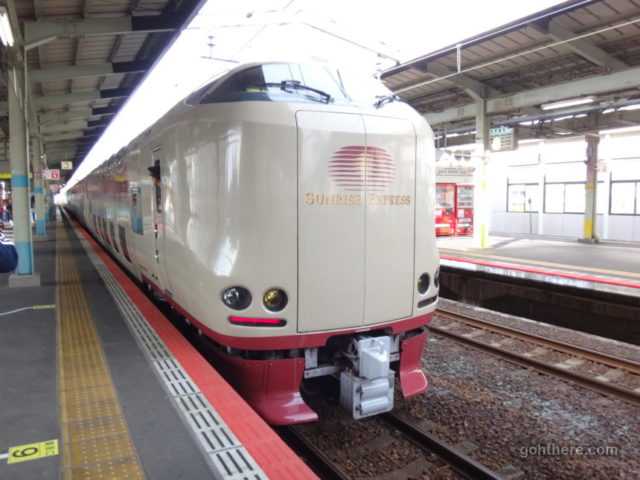 The Sunrise train moving on. It was a interesting ride!