Concluding our trip was the annual Omagai Fireworks (大曲の花火). It is considered as one of the top three firework events in Japan. We’ve had probably more than enough “top threes” in this trip so far, but more than just a public performance, it is actually a contest of the firework companies, so the level of artistic display and techniques are said to be on the very top level. In fact, the official name of the event is the “national fireworks contest” (全国花火競技大会).

The event is held in Daisen (大仙市), a normally quiet little town in Akita prefecture (秋田県), but it becomes flooded with spectators from all over the country for the event. Accommodation are commonly booked up a year in advance, and even securing a mean of transport can be a tough task. We dropped off our rental car at Kakunodate (角館) before heading there, because it would be next to impossible to find a parking space. Even by public transport, we had to consider ourselves very lucky managing to book seats on one of the Shinkansen trains so we could go back to Tokyo after the event.

Granted, today’s wet weather is not the best for fireworks viewing, but it certainly didn’t hold back to stream of people going. 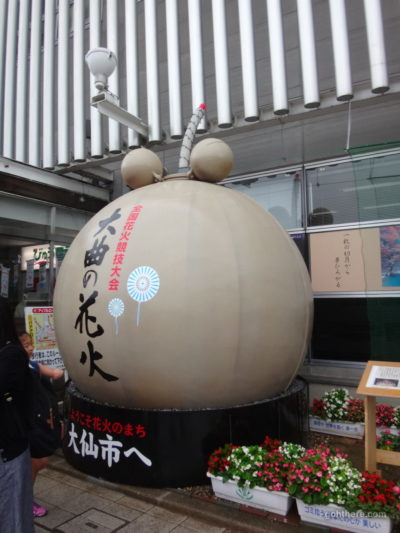 After lunch in Kakunodate (角館), we got on a local train which took 20 minutes to get to Omagari station (大曲駅). The was just about 2 pm, and the train was already completely packed. We’re not talking about Tokyo rush hour here – it’s train to a rural town! 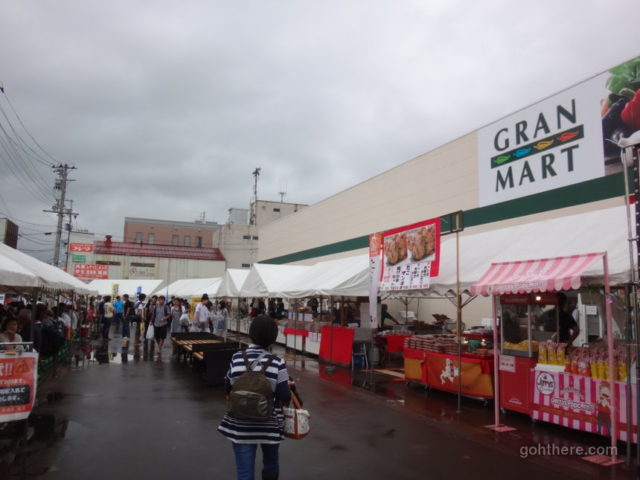 Many roads were closed for pedestrian only and lined with stores for visitors. 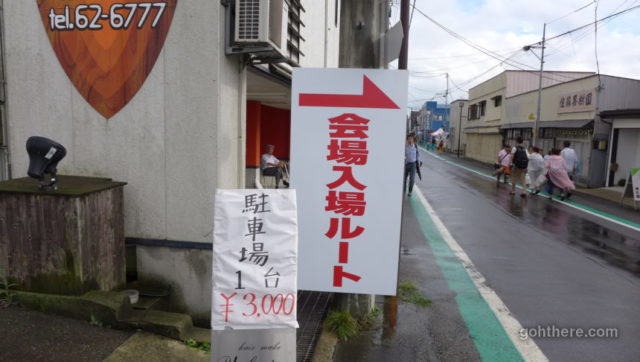 There were the occasional car parks in town. Not cheap and consider yourself lucky if you could find a vacant one. 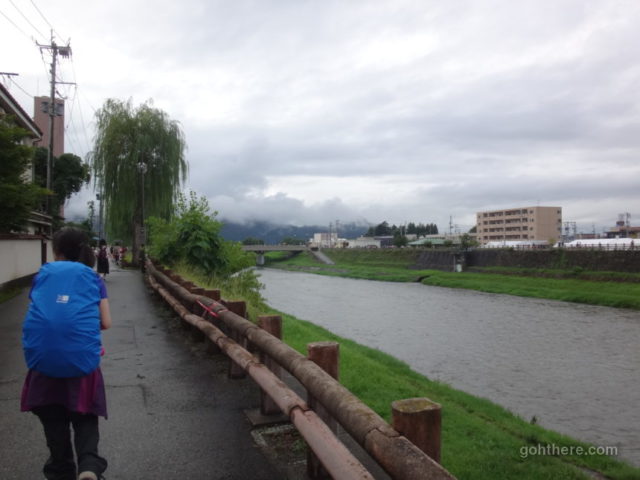 We had to carry our rucksacks along as coin lockers were rare as parking spaces. But fortunately rain relented for the time being. 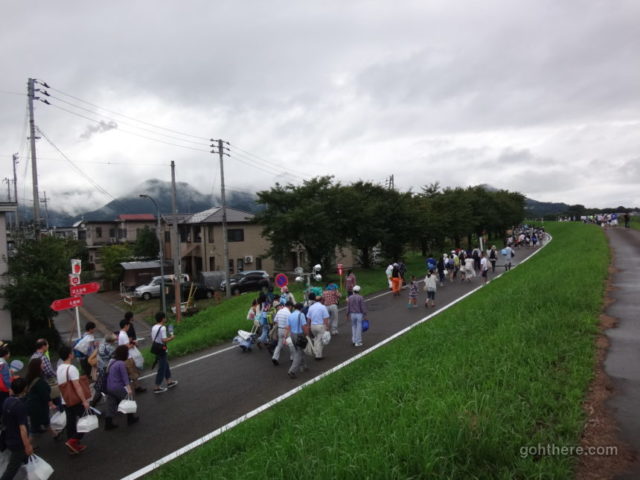 We didn’t have reserved seats, so basically had to walk around and pick a space ourselves. 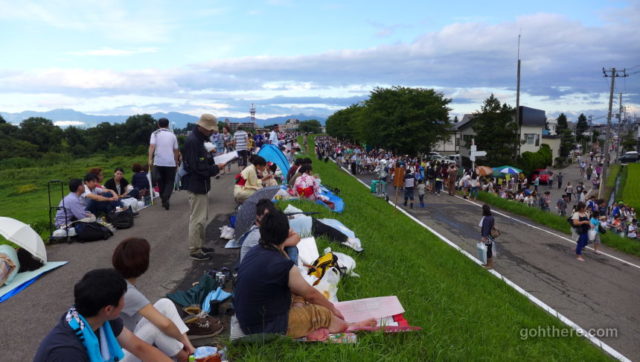 We settled on a spot on the embankment. Of course, the closer it is to the fireworks the better, but you have to balance the fact that there might be no more free space ahead. 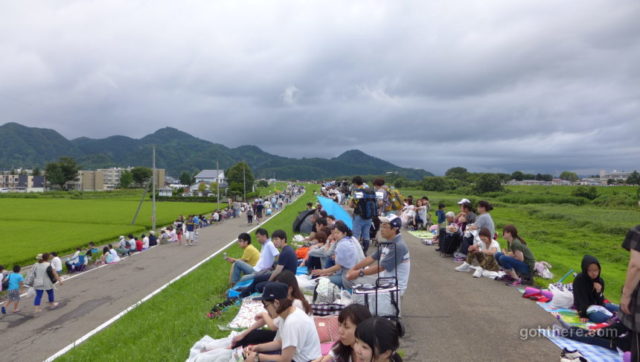 It’s already almost fully occupied, and here was already quite far from the fireworks. 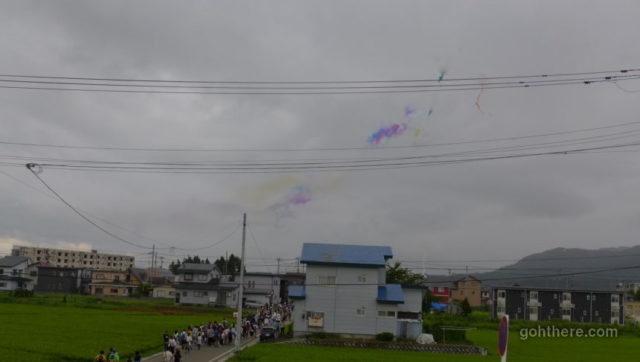 Fireworks started! It’s just after 17:30 and not at all dark yet – this was the unique show of “daytime fireworks”, something we had never seen before. 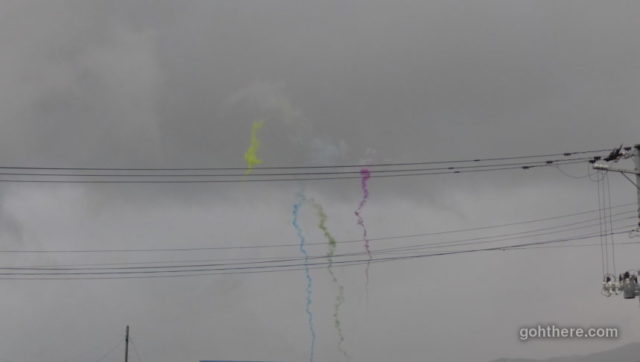 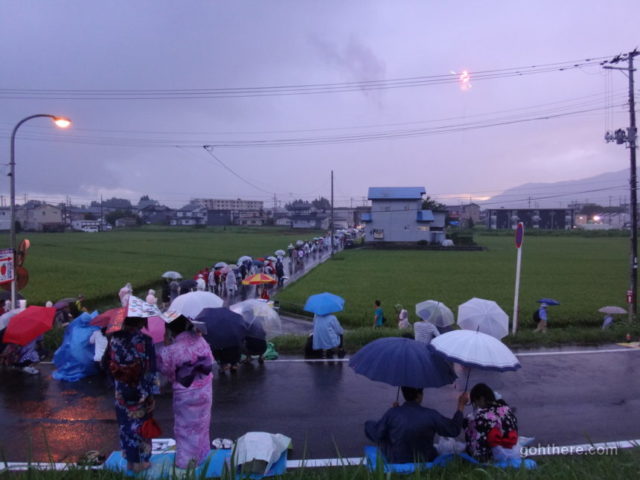 Normal night time fireworks started, and so did the rain again. 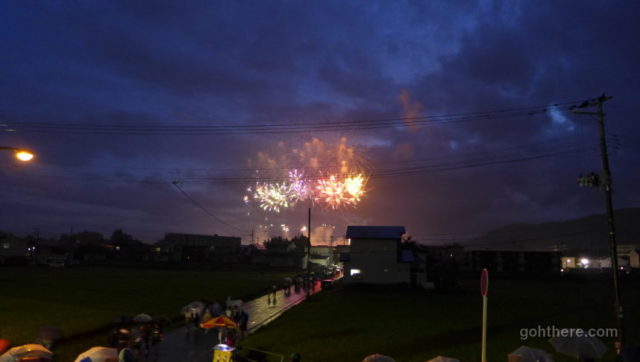 Fortunately, the rain clouds began to clear after some time, giving way to the amazing fireworks.

The Tokyo Bay Fireworks we saw before were large enough; but seeing the ones here, all the unique shapes, colours and arrangements, you could appreciate why they were considered artistic. 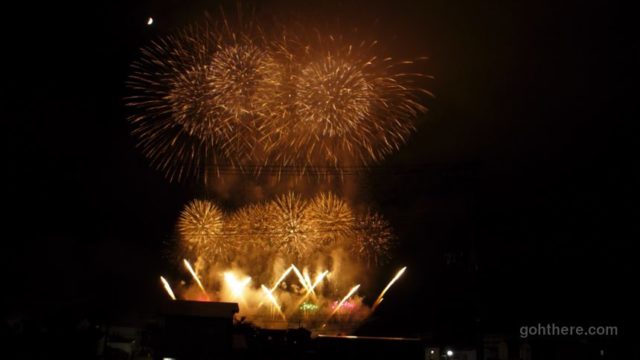 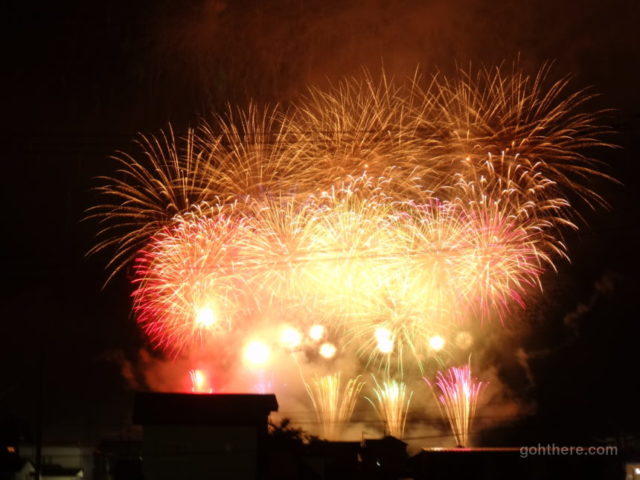 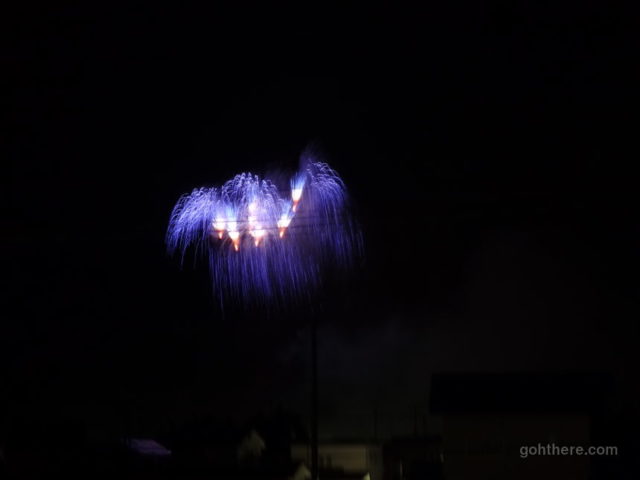 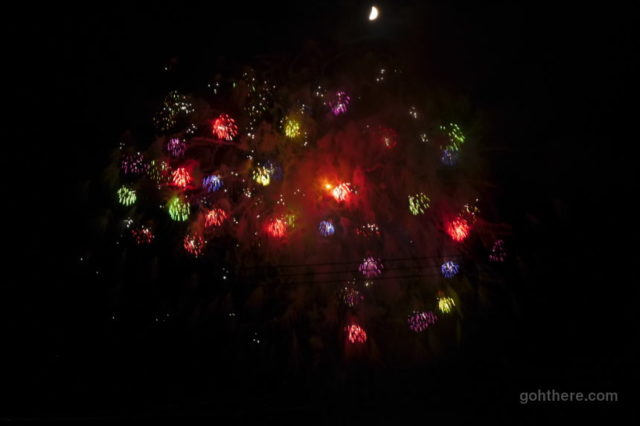 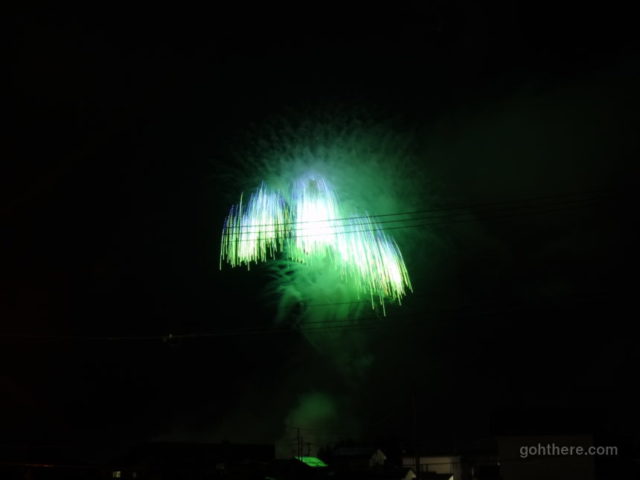 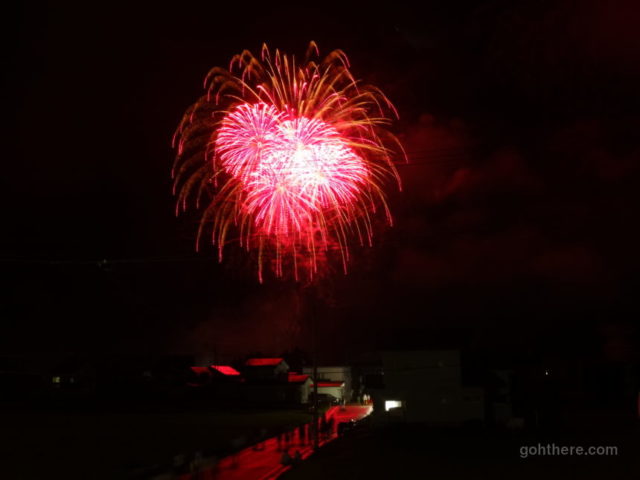 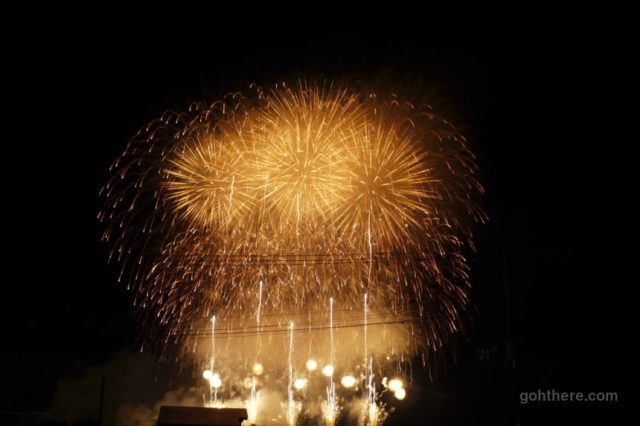 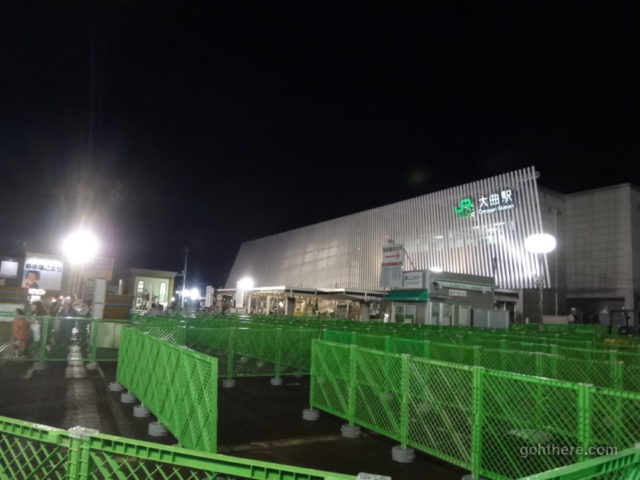 It would of course be ideal to see all the fireworks until the end, but you could imagine the flood of people dispersing after the event. Either way, we only managed to book a train departing at 21:18, so we had to skip the finale.

Outside the train station, long fences were set up in prepration for the long queues of people leaving. We left at a fairly early time, so it was still empty. 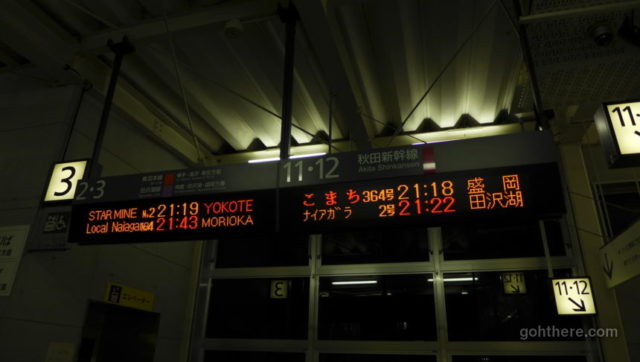 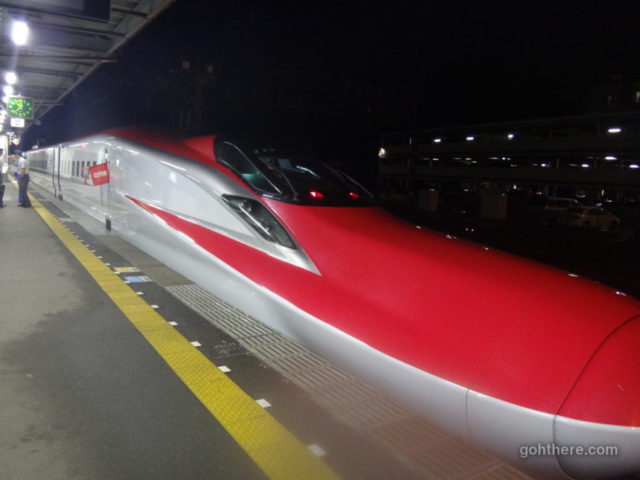 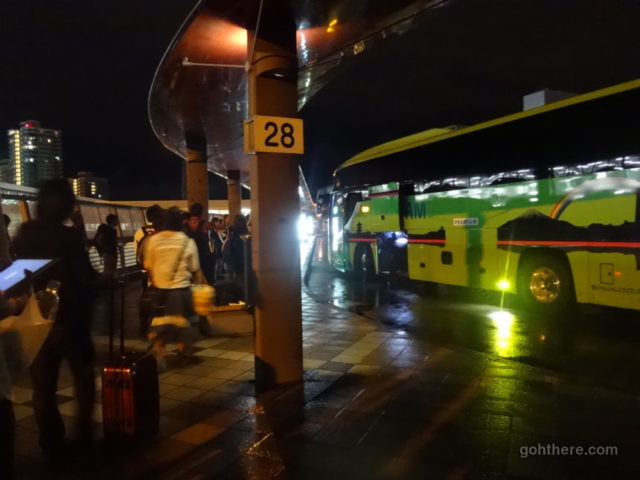 At 22:30, the train arrived at Morioka (盛岡) (yes, we were there 5 days ago!). From there, we took an overnight bus back to Tokyo, finishing our Northeast Japan trip.