There is an old Japanese saying commonly translated to English as “a wise man climbs Mount Fuji once, a fool climbs it twice”. Though literally, it’s rather “it would be a fool not even climbing it once, (but) it would (also) be a fool climbing it twice” (一度も登らぬ馬鹿、二度登る馬鹿). So you wouldn’t necessarily be “wise” to climb it once, but at least you can avoid being a fool.

Regardless, this would be me climbing Mount Fuji the second time. It was almost 10 years ago when I first climbed it, and mandatory boxes were checked – getting to the top, and seeing the sunrise. But it wasn’t at all an enjoyable experience due to lack of preparation. I was sure that if doing it a second time I’d do better. Shouldn’t we be wiser the second time?

So the preparation – it’s not so much the physical. Some physical demand yes, but overall it’s just like walking up a long steep slope. Take it slow and steady and that’s it. The preparation is warm clothing – everything else is secondary.

(OK, water etc are also important but these should be common sense; and of course it would be nice to bring a gas burner to make some hot drinks but that’s optional)

Mount Fuji climbing season is around the summer months in July and August. Temperature during that time in Tokyo and places near Fuji easily goes above 30 deg C, and you get used to feeling the sweltering heat is unpleasant, and “forget” what cold feels like, that it can be equally unbearable. There’ll get a sharp reminder once you ascend above 2000 metres, and higher, when it can approach zero. In particular, when doing the typical itinerary which is a night ascent followed by waiting for the sunset, much of the time would be spent outside in a freezing night. It’s necessary to treat it as a winter outing.

There’s another thing to prepare for to make the descent much more pleasant, which I will mention later.

There are 4 climbing routes, and here are my subjective opinions of them:

Our plan was to take the Subashiri Route both ways. Starting early evening, reaching 8th or 9th Station, and staying there until sunrise. It’s intentional not going to the top straight away, as it would be more crowded and colder to spend the long wait there. As mentioned, the sunrise view is pretty much the same once above the higher stations. We would then continue to the top after daybreak, and it should be getting warmer by then.

Transport wise, it’s train from Tokyo to Gotemba, followed by bus going all the way to the Subashiri 5th Station at 2000 metres. 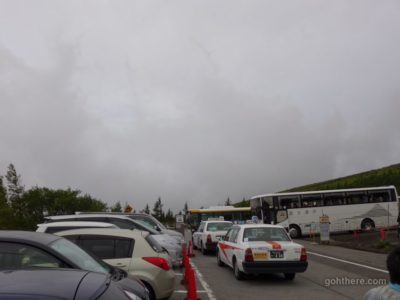 Bus stop at the Subashiri Route 5th Station. Weather not looking good, with occasional flashes of lightning. But weather forecast promised it would become better. 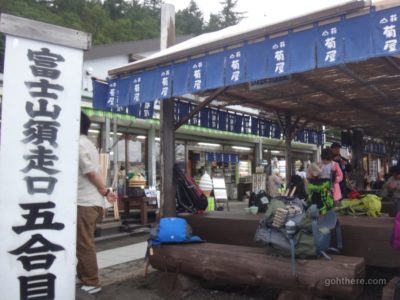 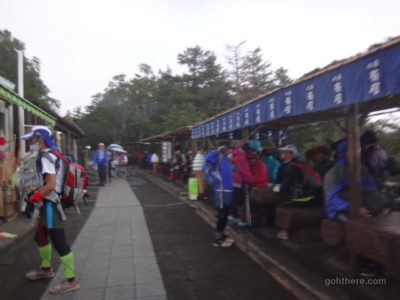 Many hikers getting ready. But still this was nothing compared to the busier routes. 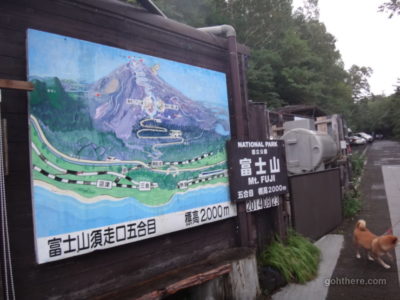 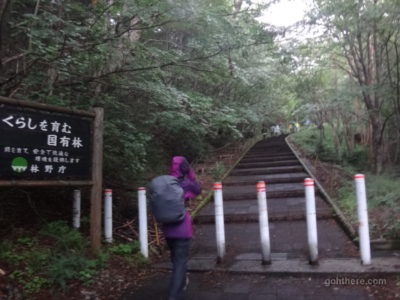 Trail head. We set off in the rain. 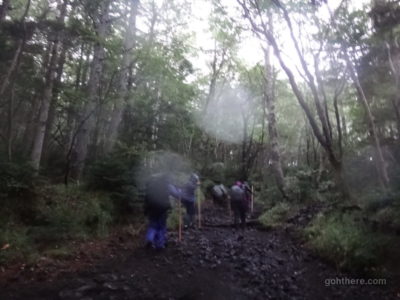 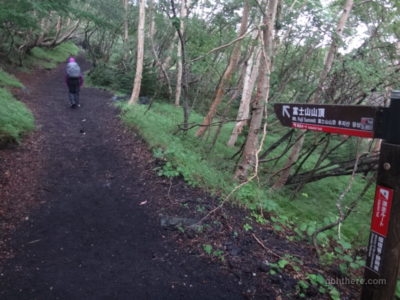 Lots of signs on the way, no worry about getting lost. 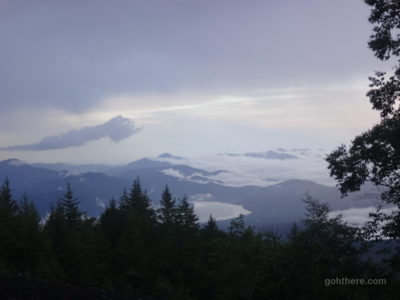 Almost above tree line. Rain clouds dispersing, we could take off our hoods. 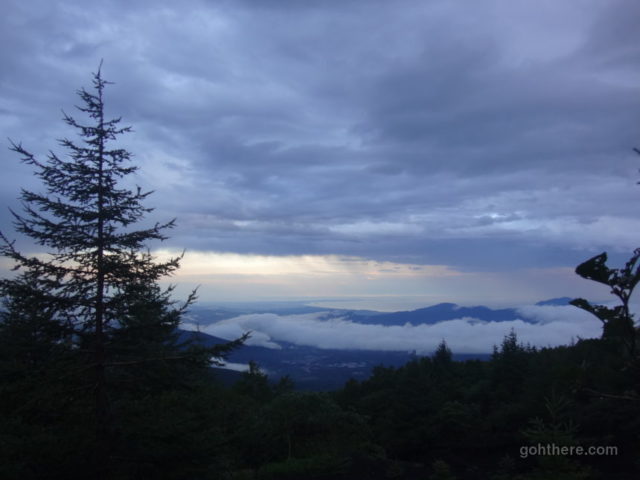 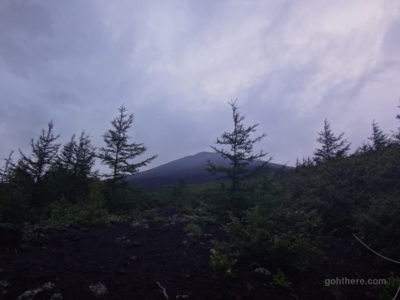 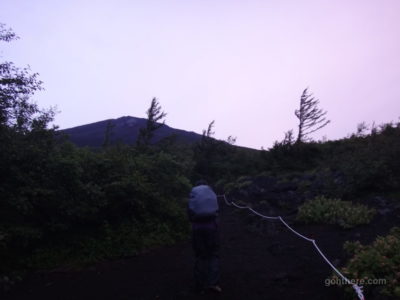 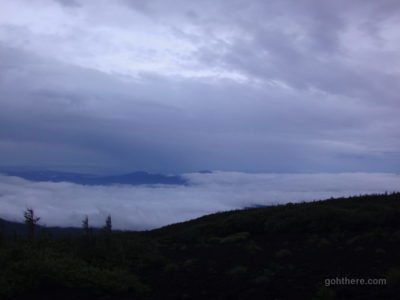 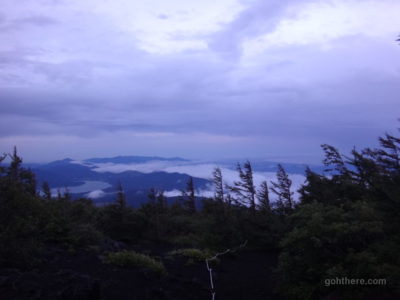 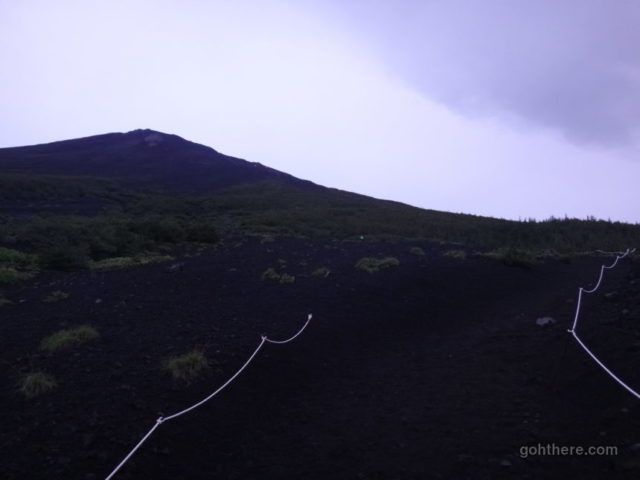 The route was so enjoyably quiet, in particular when considering this was a weekend at the peak of the Fuji climbing season. 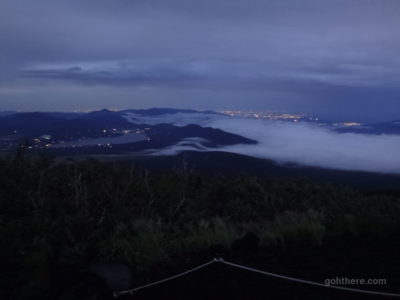 Getting dark. Cities from afar were lighting up. 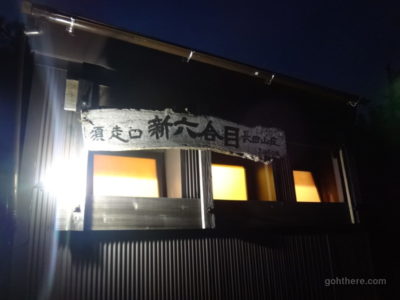 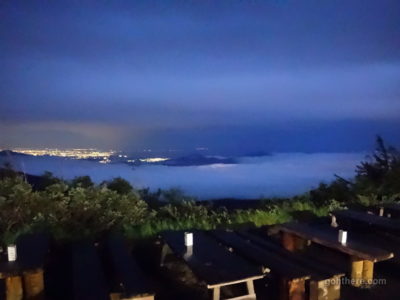 Rest area with a nice view. 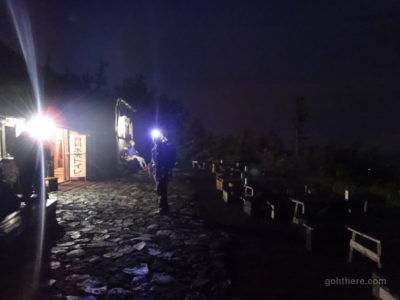 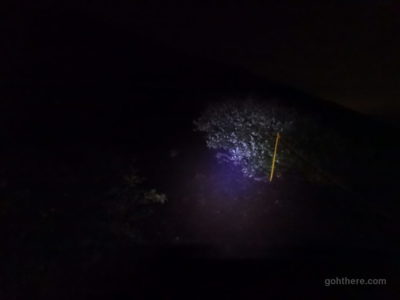 Once back to the trail it was completely dark. Headlamp is essential. (ok, you can use a torch – as I did in my first climb) 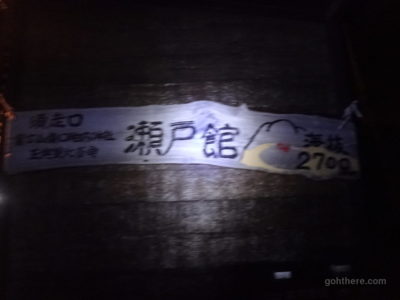 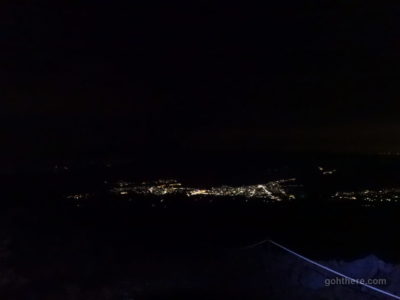 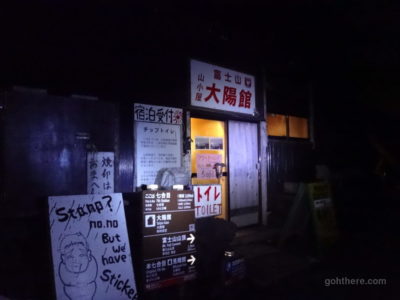 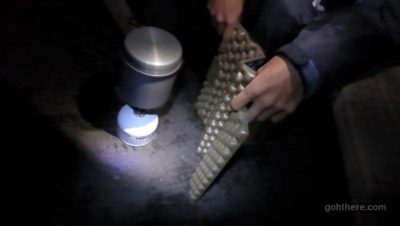 Time to cook some food to warm up. The wind was so strong so had to block it to keep the fire steady. 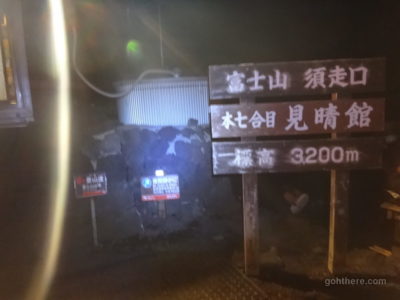 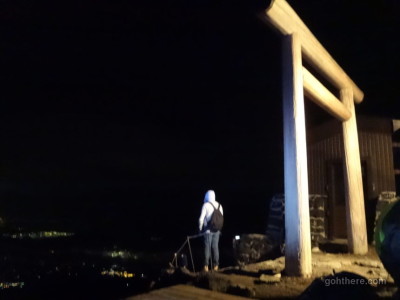 Some people did come up in just hoodie and jeans! 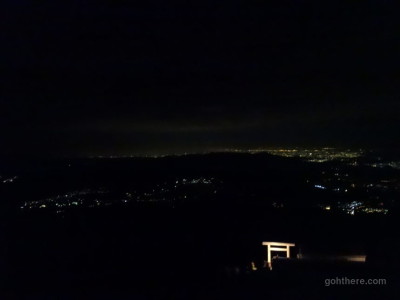 Between 7th and 8th station, just about midnight.